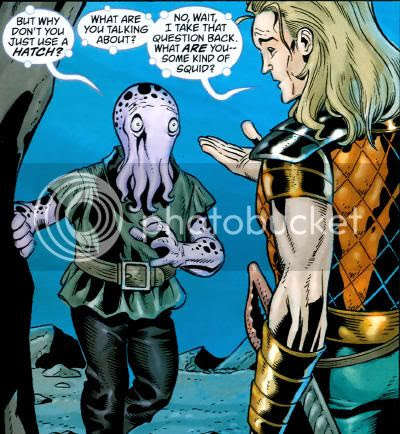 Arthur Joseph Curry, King Shark, and the Dweller in the Depths had defeated a new version of the Fisherman, or as Artie Joe put it, "evil jellyfish man." The Dweller wanted to continue pursuing the forces of evil, but Arthur just wanted to relax for a while. The Dweller received a premonition alerting him to a need in Atlantis, so the other two followed. En route, Arthur spied some religious zealots attacking a diminutive squid-boy, and a fight broke out. King Shark didn't like how the mouthpiece of this Purification Shoal was looking at him, so he bit the fishy jerk in half.

The survivors fled, and the Dweller pressed Shark to carry on with him, but Arthur insisted on staying behind to see to the squid-boy. "Excuse me? I am nothing so primitive as a squid. I am a coleoid humanoid, a freeborn citizen of Neos." The squid-boy kind of recognized Arthur as Aquaman, but kind of not. Introductions were made, but the squid-boy's name was a series of color changes to his face. Arthur decided to call him Topo instead. "What kind of name is that? ...It sounds like something you'd name an organ grinder's monkey!" Arthur liked it, because it felt right somehow, but wondered how Topo knew anything about monkeys or organ grinders. Topo's people were advanced enough to have their own version of the internet, and the guy was no ignoramus. The pair made off for Atlantis, with Topo believing he'd been drafted as Aquaman's sidekick.

The Molloy Basin, under waters off the coast of Greenland. The one called Narwhal attracted attention with a simple glowing staff with a sharpened tip. A massive saurian creature of the depths tried to devour him, but the power of the staff tore the creature apart from the inside out. The trap was a test put to Narwhal by Pardoner, and he asked his master whether he had passed. "Yes, my pallid fingerling. Ah, Narwhal, look at you! Why would you ever want another name, my sweet corpse-whale?" Narwhal was amnesiac, and longed to know his true identity and history. 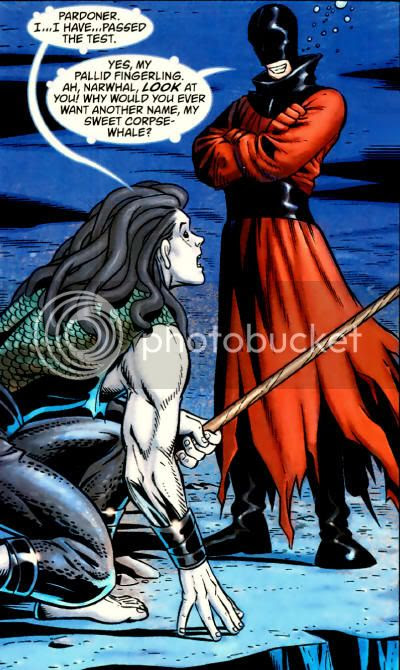 Pardoner took Narwhal to the hidden city of Dyss for an audience with the Sea Bishop. The holy man was garbed in a purplish brown robe, his inhuman face obscured by a hood. Sitting on a throne, the Sea Bishop was served raw octopus, which he devoured whole. "Call him 'Your Grace,' my pale beauty. Don't embarrass me with bad manners." Narwhal felt he had not a name, but a "battle flag" to carry against the Sea Bishop's enemies. Narwhal was a rare warrior, so the Sea Bishop indulged him to maneuver Narwhal toward mortal combat with Orin of Atlantis, the greatest enemy of the Deep Church. Narwhal recognized the true name of Aquaman, but could not recall how. The Sea Bishop continued, speaking of how the city of Dyss had been built around the sleeping form of their deity, Urlok the Awaited, who would awaken at the death of "the wicked monarch of that debauched, cursed place..." The Sea Bishop granted the name "Issitoq, the spirit of vengeance-- Issitoq the Narwhal." It didn't resonate as Orin's name had, but Issitoq went off on his mission regardless. The Sea Bishop then discussed with Pardoner how the narwhal had not forgotten his other life, and may need to be disposed of once Orin was dead. Also, "I'm tired of octopus. Have the prison send up a heretic or two. Smallish. I don't want to spoil my supper."

Ymirsheim, an island in the Arctic Ocean, where the ship that hosts Windward Home had traveled. The ghost of Vulko was sure this place was written of in Atlantean texts, but those were out of reach, so he made do with surface world resources. Captain Jimmy Lockhart met with Elsa to discuss the energy signature detected in the area "hot as a nuclear stockpile" and getting worse. An expedition onto the ice was mounted, but a snowstorm forced its members to seek shelter in a cave. The interiors were amazing, with writings on the walls resembling ancient Atlantean. It was theorized that this place had been hidden for God knows how long, and only revealed due to global warming. However, what little could be made out of the writing indicated a warning of death... 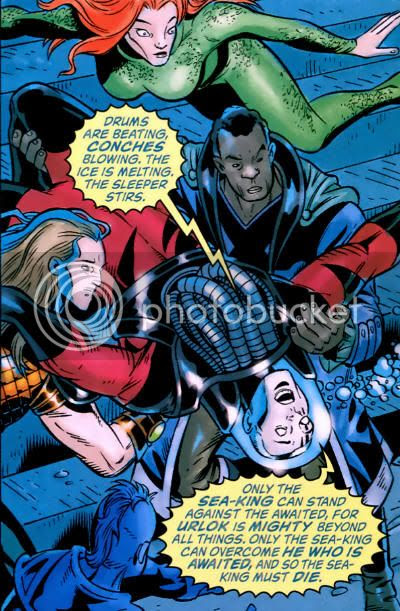 The Aquaman crew reached the ruins of Atlantis, where Arthur was introduced to the Sea King's former kid partner. Garth had been found wandering without memory of where he had been the past year, his hair gone white and his ability to breath either air or water compromised. Cal Durham had found Garth, and fitted his with a breathing apparatus before presenting him to Queen Mera. Cal had been presiding as mayor over those who had not risen with Sub Diego when it was restored to San Diego, and welcomed the excuse to reestablish ties with the remains of Atlantis. Garth asked after his wife and child, but received no answer. Topo spotted a Thorny Crown symbol on the back of Garth's neck, and the mere mention sent him into convulsions. Garth could hear only the beating of savage drums, and prophesied that only the Sea-King could stand against Urlok before passing out. Mera argued with the Dweller who exactly the champion Sea-King should be, until the Dweller swam off.

Topo explained that the people of Neos were refugees from Dyss fleeing religious persecution from the Deep Church. "...We fled with Dr. Arkelon and Lady Pelikaia-- but barely escaped from the Bishop's Punishment Shoal..." Arthur ignorantly referred to Neos as "Squidville," to which Topo sternly replied that there were a variety of peoples there, and it was technologically advanced. The topic of Topo being a well informed super hero geek was broached, and Topo kept wondering why people of Atlantis would swim great distances when there were "hatches" all over.

Elsewhere, prideful Atsiul led a company of guards in search of a monster that had made a massacre out of a caravan. Atsiul was the lieutenant of Mera's who kept fighting with Arthur Joseph Curry, and now had the misfortune of crossing the path of Issitoq the Narwhal. Demanding he stop and give an accounting of himself, Atsiul joined all but one member of his party in being killed to death in short order. The lone survivor had access to a power-sled meant for supply transport, and used it to reach Atlantis just ahead of Issitoq. 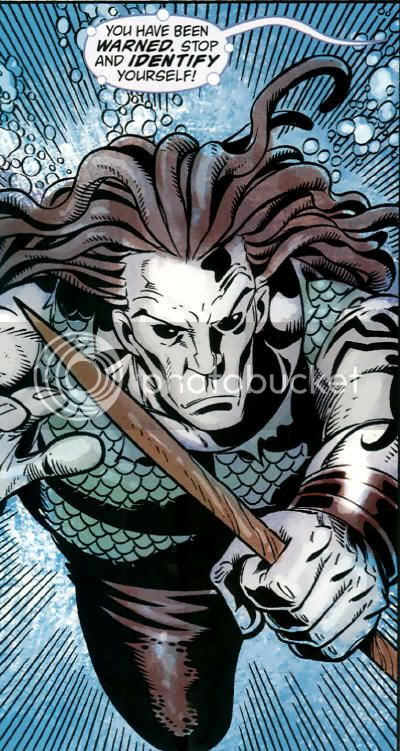 Arthur met up with King Shark, who revealed that he had only stuck around on orders to kill the new Aquaman when the time was ripe. "I wasn't going to do it-- I don't think I was going to, anyway." King Shark liked Arthur, but hated the Dweller now that he knew that he was really the previous Aquaman responsible for spearing him on a trident. King Shark didn't want to stick around Aqua-Town, where everyone wanted a second chance to gut him, but promised that he would have his final reckoning with the Dweller at a later date. Until then, King Shark had decided to leave the group. "And when you see that Vulko spook again, you tell 'im I was paying attention to what he said. See you around, pink boy." Before long, King Shark managed to find the Dweller alone, but the former Aquaman's confusion about his present nature perplexed Shark, as well. King Shark swam away to "go kill something I'll want to eat afterward..."

The survivor warned Queen Mera about Issitoq, "more powerful than anything I have ever seen-- even the king himself, in his prime! He slaughtered dozens of us!" Rodunn was to assemble the Atlantean guard at the ruins of the Great Gate, while Arthur set out to find the Dweller. Topo inked himself.

The Dweller could sense the coming of Issitoq, specifically to kill him, and warned Arthur to save himself before the Narwhal's arrival. Issitoq dealt death at the gate, and reaching Arthur, made short work of the young fool. The sword of Atlantis broken, Issitoq approached the Dweller, who recognized him. "You do not know me! Do not try to trick me!" Issitoq stabbed the Dweller in the chest, then swam away. Arthur woke up later to find and cradle the Dweller's body. "I failed, damn you! You tried to make me a hero, but you failed. But I'll avenge you." Arthur picked up the shard of a sword he still had left by the hilt, and drove it into a nearby rock to serve as a tombstone. "I don't need the sword of Atlantis... to be the sword of Atlantis!"

"Cold Water" was by Tad Williams, Shawn McManus, and Walden Wong. Kurt Busiek and blogger Scipio Garling were thanked in the credits. Quite the sea change, no? Tons of stuff going on, recent supporting cast members out, old and new ones in, completely different art, coloring with colors instead of slathering everything in murky blue. This has already been a long entry, so more next week.