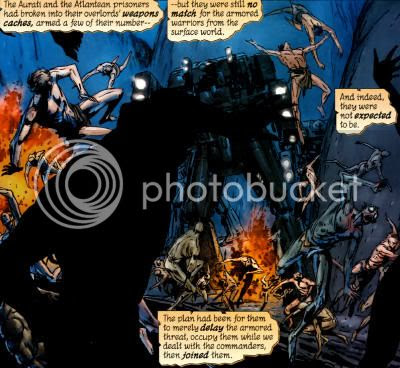 Those underwater mechs? Sea Hammers. They tore up the freed Atlanteans and Aurati Raiders. Ocean Master? Talked mess about sending a boy to do a man's job, and how only the strong survive in the ocean, yadda yadda. Arthur Joseph Curry? Really was gutted, and had to be pulled to safety by King Shark. Mera? Used her hard water powers to destroy a sea hammer, but then fainted out from the expenditure of her compromised energies. Dweller in the Depths? Half his body was animated ocean, and he used his magic to heal Artie Joe.

Arthur led the escapees into a narrow cavern, and they were pursued by the sea hammers. The pilot of one was a black man dressed in purple, so he surely worked for Manta at some point in the '70s. Dane Dorrance was supposed to set off some charges to cause a rock slide the agile swimmers could avoid, but Ocean Master kicked his ass. Somehow, the rock slide still took place though? Ocean Master ripped out Dane's throat and left the Sea Devil as a distraction while Daki helped him escape. The Dweller healed him too, so Dane was totally cool while still leagues under the ocean in a compromised suit, which I'm sure is how science works. As it turned out, whales had caused the rock slide, alluding to Artie Joe having additional powers without actually having to cop to talking to fishies.

Mera was worried about Orin's transformation into the Dweller, but her husband felt that this was part of a destiny he needed to fulfill. I guess talking like a wizard or the Phantom Stranger or whatever instead of like Aquaman was part of that metahuman cosplay destiny. It was revealed that King Shark's father had compelled him to stick close to Arthur into such time as he should pull a Brutus, but only to the reader. Arthur Joseph Curry recognized the oceans needed a hero, and that he didn't need shoulder pads, so he accepted the role of Aquaman. Finally, Tri-Dent Industries, the guys who had hired Ocean Master, had managed to resurrect Arthur's father through extraordinary measures as a tool for their schemes.

"Watery Grave" was by Kurt Buisek and Butch Guice. It wasn't as deathly dull as the prior five issues, and the art was much more dynamic this time, but I still wouldn't exactly call it good. Artie Joe was thoroughly punked by Ocean Master, and the way that works isn't making Orm look tough, but Aquaman Jr. look wimpy. I thought the point of this series was to get away from Aqua Dolittle, but the real heroes were the whales. Despite her weak constitution, Mera was still the closest thing to a badass with her water wedge. I guess the Dweller got to show off, but that just reminded me that he should have been the hero of this story, seeing as he was the star of the first thirty-nine issues of this series. Ah screw it, I'm just glad to have read this story for the second and final time, hopefully of this life. As soon as I get around to it, we'll jump ahead five issues to Tad Williams' vastly superior yet still just okay run.