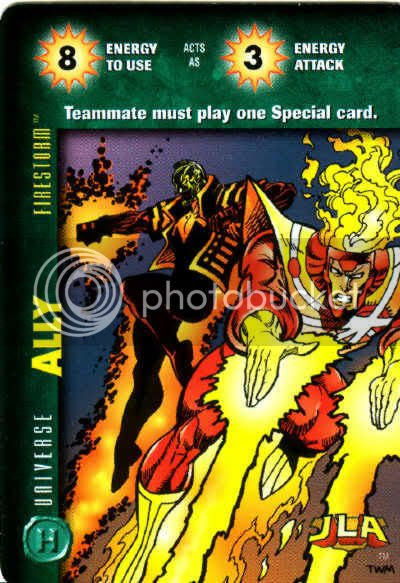 Again, I've treated this blog shabbily, so I figure more double posts are warranted. Also, I wanted to draw your attention to a new blog dedicated to Detroit League associate Firestorm. The Irredeemable Shag of ONCE UPON A GEEK has begun Firestorm Fan, a devotional to the Nuclear Man. As an added bonus, he's paired here with the Ray, a teammate of Gypsy and Martian Manhunter on the Justice League Task Force, which will inevitably received coverage here.

The card itself is an Ally, which can be used as a 3 point Energy attack by any Character with a 8 in Energy on their Power Grid. Only Ray and Brainiac had such a high rating in the DC game, so you would have to bring in some Marvel characters if you didn't want to risk the card being rendered useless in the event of a knockout. AS Ally cards go, it was pretty good, but Firestorm obviously deserved his own Character card.

The art here appears to be by Tom Morgan, who mostly worked for Marvel, but had a good little run on Extreme Justice.
Posted by Diabolu Frank at 4:53 PM

Thanks for the shout-out! And very cool card! I hadn't seen that before.