Crisis On Earth-Blog: The DC Challenge 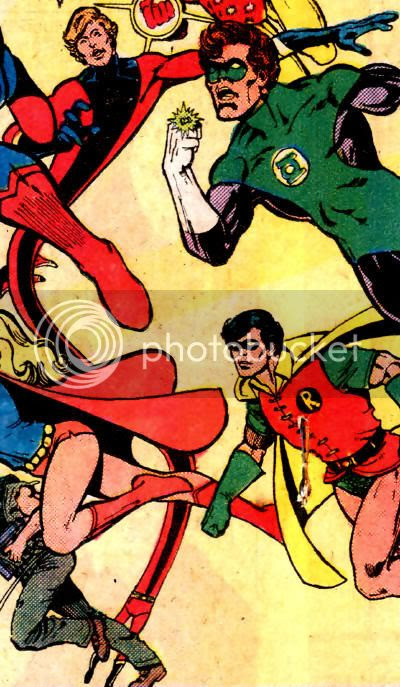 Today, you and me are on an all new case. Below are a series of puzzles left by a nefarious mastermind. If you figure one out, you can follow the link to another blog with more riddles to work through. This'll draw you closer to one of two high quality, obscure pin-ups featuring characters spotlighted in this game. Wrong answers will send you to a "dunce" page, with suggestions on where to go next. You can also be a quitter and click the "I Don't Know" button, which will send you to a page that'll help you buy a clue.

So, you think you can keep up with the Stretchable Sleuth? Let's just see about that...

1)After the Detroit-era Justice League of America was disbanded due to an executive order by then-U.S. President Ronald Reagan, which super-hero banded together their replacements in the next incarnation of the team?

2) I loved my wife, my better half,
but duty called, to pave my path,
to dizzying heights, I did aspire
ever to fight, and face the fire,
adversity took, the place of honors,
for I mistook, just like Curt Connors

3) Solve the apposite anagram and select the character to which it refers:

4) Batman was only briefly a member of Justice League Detroit before quitting without notice. Perhaps that's why the spirits of Elongated Man and his wife Sue Dibny returned the discourtesy by only working with Batman and the Outsiders for a brief period of time. Why, I doubt they even met the team's resident scientist, Dr. Francine Langstrom, better known as the wife of...

5) Solve and choose the closest answer:

Hey, Ralph! You forgot that your last name Is Dibny, not Dibney! Did you change it because nobody gets it right?