Commander Steel in "Assault of the Lizard-Men" 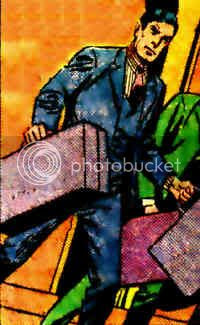 In August of 1939, Henry "Hank" Heywood had volunteered to defend the just nations of the world against the Axis powers. Unbeknownst to him, while Heywood was off to slap Japs and jab Jerries, Heywood's country had been overtaken by a slithering, silent invasion. It ate at Hank's gut that he returned home to find that the U.S. had fallen under the influence of creatures not of this Earth. Masquerading as humans, these Lizard-Men had wormed their way into the heart of humanity. Anyone who knew, who tried to speak out, would spontaneously combust. Even our super-heroes, like the Justice Society of America, were not immune. Hank was though, somehow, perhaps because of his own lack of humanity. With the help of his mentor Doctor Giles, Hank had rebuilt himself as the cybernetic superman Commander Steel, but what good was it if he couldn't free his people without burning them up? Yeah, Hank knew, and maybe because they knew he knew, he was able to build Heywood Defense Industries after the war. Through government contracts, Heywood applied his technological genius to create advanced weaponry, which would eventually end up in the lizards' slimy clutches.

Here it was 1960, and the millionaire Heywood was in Africa, using the prospect of opening a plant as a cover for gathering a negro army. The Lizard-Men's influence was mostly in Western countries, so Heywood hoped that General Mustapha Maksai's forces could provide him with an unadulterated resource. However, to get to Maksai, Heywood had to set up a meeting with his pantywaist brother, the Reverend Ricard Jiwe. At a diplomatic function, Heywood met Jiwe and his very pregnant wife, all of whom were soon surrounded by armed Lizard-Men. Heywood had never seen them take on the appearance of colored men, but he guessed to a reptile one shade of flesh was as good as the next.

It was time to make a decision. Hank was bullet resistant, but not proofed, and there was Mr. and Mrs. Jiwe to think about. What to do?

Rush the Lizard-Men?
Shield Mrs. Jiwe?
Posted by Diabolu Frank at 1:01 AM

Also this reminds me I need to email you about Hank Heywood.

Glad you dug it!