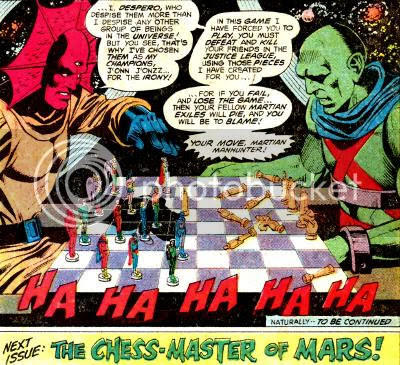 Aquaman: Took on a Russian trawler in the Mid-Atlantic Ocean illegally harvesting dolphins. "You people never learn, do you? You think you can rape the sea, the way you've raped the land! Isn't it enough you spill your wastes in our waters? Isn't it enough you sink oil tankers in breeding grounds? In Neptune's name, you may not have had enough-- but I have!" The Sea King took a few lumps, but called on a whale to bat the sailors off their ship. Strangely, they then transformed into large, bobbing, featureless and angular statues.

The Atom: Helped a pal foil kidnappers in Ivy Town by riding along in the payoff briefcase. Was shocked when the creeps turned into two statues like Aquaman's with a third appearing with religious iconography.

Green Arrow and Black Canary: Dressed as bikers in Star City, the pair karate chopped their way into a white trash/supremacist rally. They were then attacked by an animated statue of a knight riding a horse's head, a chess piece brought to dangerous life. A Canary Cry shattered it.

Batman and Superman: Having foiled hijackers at Gotham Airport, the World's Finest were assailed by fiery cannonballs from mobile castles/rooks. Switching to kryptonite projectiles, the Man of Steel was bowled over, leaving the Dark Knight to detonate explosives in yet another chess piece.

Zatanna: On the JLA Satellite in orbit 22,300 miles above Earth, Zee compared the reported assaults while on monitor duty. "You're the detective, Batman. I'm 'just' a sorceress. But from where I sit, it looks like you've all been involved in the opening gambits of some cosmic chess game, with deadly pieces... I think we'd better call an emergency meeting!"

Elsewhere in the cosmos, a purple flying saucer rested in outer space. Within sat a chess board, half filled with pieces representing the full JLofA membership, including Elongated Man, Hawkman and Hawkgirl, Green Lantern Hal Jordan, the Flash, Red Tornado, Wonder Woman, and the rest. Not among them was a long absent former member, the Manhunter from Mars, who was instead bound in the opposite chair. Manhunter's chess pieces having largely fallen, his opponent cackled.

"HAHAHAHAHA! It seems the opening moves have all ended in my favor! How ironic that I should be pleased by the victories of the Justice League... I, Despero, who despise them more than I despise any other group of beings in the universe! But you see, that's why I've chosen them as my champions, J'onn J'onzz... for the irony! In this game I have forced you to play, you must defeat and kill your friends in the Justice League, using those pieces I created for you... for if you fail, and lose the game... then your fellow Martian exiles will die, and you will be to blame! YOUR MOVE, MARTIAN MANHUNTER!"

Keep blogging.
Have a nice day.