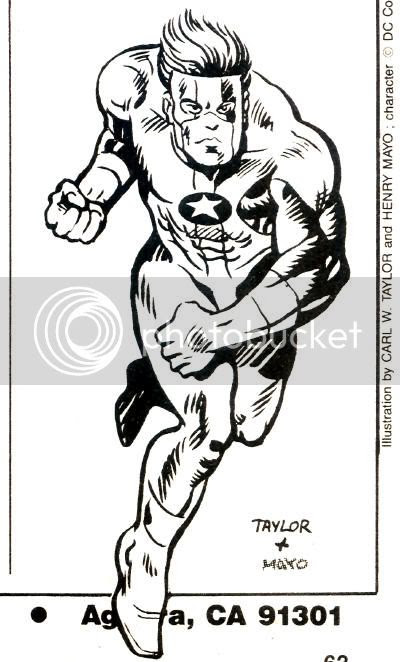 Hello again, everyone. Sorry for the absence of posts over the holidays, but I've been spinning plates, and I hoped all those custom action figures would distract you. Plus, I've got some plans for posts in the near future that should make folks who follow this blog feel less like it's a red-headed stepchild on my agenda.

Speaking of ginger undesirables, here's vintage fan art by Carl W. Taylor, a frequent contributor to Amazing Heroes magazine. The far more literate antecedent to Wizard published throughout the 1980s, this piece appeared in the letters column to September 15, 1985's Amazing Heroes #79, under a letter from Nancy A. Collins railing against Chris Claremont, 80s New Wave acts, Prince, Don McGregor, and Bill Mantlo. She invokes the specter of Frederick Wertham in relation to American Flag!, and Swamp Thing. Collins even finds time to praise Rick Veitch and wonder if hints that Hawkeye was descended from Captain America would ever be paid off*. This went on for about a page and a half.

Unusually enough, Steel (or rather his grandpa in Commander garb) also appeared earlier in the issue, in an All-Star Squadron spread illustrating an article speculating about the exact birthdates of Justice Society of America members. Ah, geekdom. You live on in message boards...