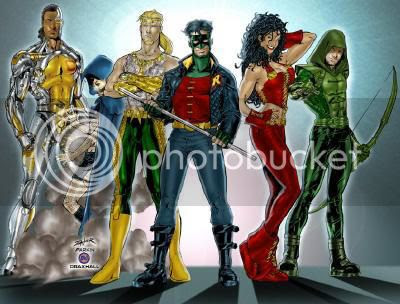 The Vixen has posted early from its supposed Thursday berth several times already, and since this week will simply be an art post, I'm bumping her to Saturday for this special program: Ultimate Detroit Crew!

Wizard Magazine pissed me off as a matter of routine in its glory days, but now that their print edition is dead (see also: the entire industry in the next decade or so,) I'd like to look at one of their fun (if frustrating) features: partially-legitimized fan fiction. The Wizard staff tried to do a DC version of Marvel's Ultimate line back when it mattered to anybody, and while there's a reason none of these guys became professional writers, some of the art commissioned by Draxhall Studios was kind of nice.

First up, Christian Zanier designed Ultimate Batman, and it's funny how much it looked like the recently unveiled design from Batman Incorporated. Since Batman was one of the few DC characters whose knob Wizard was inclined to slob, there were no radical changes to his usual story. They just had Bruce Wayne be more of a businessman than a playboy so they could have him butt heads with Lex Luthor. Bruce would also now grow up with Harvey Dent, and Dent would be engaged to grad student Barbara Gordon. Well, I guess that's more of a tweak than it seems, since they cast Morgan Freeman as Commissioner Gordon, so the relationship would presumably be interracial. Nan-na-na-na-na-na-na-na-nan-na-na-na-na-na-na-na BlackGirl! I can dig it. Finally, the Joker would start out as a clown-themed vigilante, and the staff teased truly uninspired plotlines culminating in a fiftieth issue.

Next up is... hmm. Ultimate Elongated Man? Ultimate Vibe? I guess besides covering Martian Manhunter at another blog, the only Motor City Leaguer I have left is Aquaman. While the other Ultimate DC Heroes tied together in an Ultimate JLA project, there was one last concept at the back of the bus. While the most daring of the lot, it also proved the most exasperating.

Once the JLA formed, LexCorp decided to create its own competing super-hero team through an audition process. Robin would bypass a partnership with Batman and go straight to the Ultimate Teen Titans. Wonder Girl is in there when they should probably have used Starfire. Cyborg is redesigned, but the same basic dude. Raven's a goth, because of course she is. Why does all that matter here? Well, because Green Arrow is now a member (as Roy Harper,) and Aquaman is demoted to JLA Jr. status. Blech!

"The arrogant Prince Arturrs of Atlantis, a 19-year old future king called Aquaman, wants to familiarize himself with the surface world before taking up his royal responsibilities; he insists he's the team's natural leader, much to the chagrin of the others."