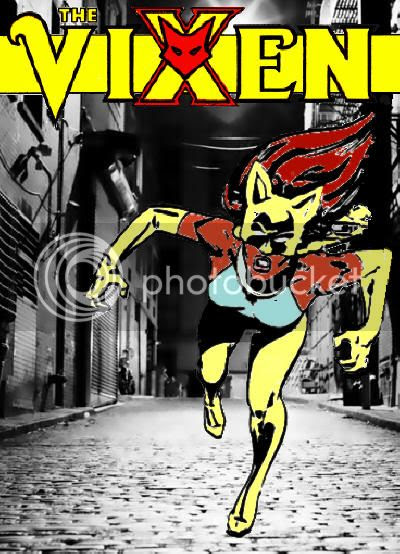 TwoMorrows Publishing’s Back Issue magazine features a section called “Greatest Stories Never Told,” which examines various comic book tales that either never made it into print, or did so in a form heavily altered from the original intention. For instance, interviewer John Schwirian discussed Gerry Conway’s initial plans for his co-creation (with artist Bob Oksner) of the first major black super-heroine at DC Comics, the Vixen. The Lady Fox’s debut comic book story missed its scheduled appearance in her own self-titled bimonthly series in 1978, instead ending up cataloged in the copyright-securing Xeroxed “print run” of Cancelled Comics Cavalcade given out to staffers and kept on file. The book was lettered up to the penultimate page, but never colored. No further work was done on the comic, besides a script by Bob Rozakis for a planned back-up feature in the second issue meant to star Harlequin.

Vixen’s first appearance in a title that was actually circulated came three years later in a team-up with Superman. After one more such guest spot three years later, Vixen finally made a minor splash as a member of the “new” Detroit-based Justice League of America, in an entirely different costume with a revised origin from the one held back from the public six years prior. It would be another quarter century before Vixen finally got a solo mini-series.

Getting back to the character’s origins, Gerry Conway was one of the premier writer/editors employed by DC to help glut the market, in a bid to pull market share away from Marvel Comics. This special talent required coming up with unexplored angles that might draw in new readers. The only black super-heroine most people knew of in 1978 was Storm, well before the X-Men were the industry juggernaut they would become in the ‘80s. Conway saw a need for more, and tried to come up with a unique power set for his developing creation. “Quite a few heroes had ‘animal’ powers… but I liked the idea of a hero who’d have many different abilities to draw on… I was aware of Animal Man, but that was a character who hadn’t been used in almost a decade, and I felt my take on the idea was different enough… I liked the idea of tying Vixen’s powers to her heritage, making her more than just another ‘lucky accident’ kind of hero.”

Conway flew by the seat of his pants, Stan Lee style, so he only had vague ideas of where the book would have gone beyond the first story. No further use of the African background was planned, as the Vixen was meant to be a pure urban vigilante from then on. “I hoped to write the series for a long time and develop the character... letting the stories themselves suggest future events as I wrote them.” However, the Vixen material lay fallow, even as other cancelled books from the “DC Implosion” were repurposed in surviving titles. Conway confided, “Honestly, I don’t think anyone was that wild about how the first issue turned out.” Still, “I loved the character, and wanted to see her in print anywhere it was possible.” The first opportunity was the aforementioned Action Comics, followed a few years later by a DC Comics Presents team-up. 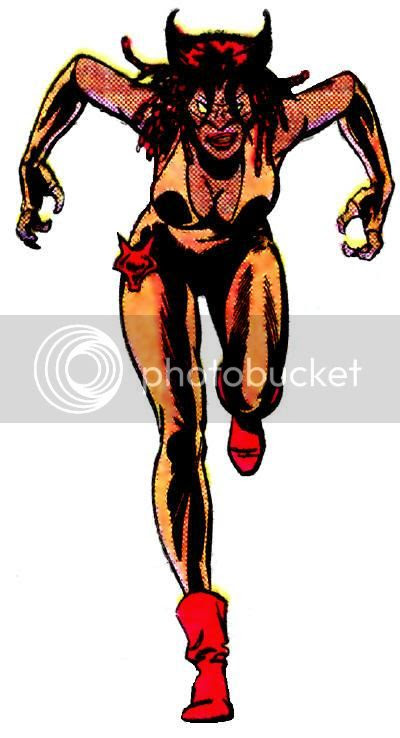 Conway was part of the team hoping to revamp the Justice League of America as another young, hip, soapy super-team along the lines of The Uncanny X-Men and The New Teen Titans. It instead fell a bit short of the low bar set by Batman and the Outsiders, mixing leftover C-listers with Conway creations both old (Vixen & Steel) and new (Vibe & Gypsy.) “I wasn’t happy with her original look, and saw this as an opportunity to start over. Mostly, I wanted to make her more interesting.”

The team book’s artist, Chuck Patton, was asked to redeem Vixen visually. “I do remember at the time, that I followed Oksner’s initial design for Vixen—but I did not like the overall color scheme. I believe she was dressed then in some kind of light bluish and yellow that I thought was just awful. The goal of the new Justice League was to bring a younger but harder-edged appearance to the team rather than the Old Guard's primary colors.” Of Vixen, Conway noted, "I wanted her to balance Gypsy's youth and inexperience with a more seasoned, mature approach. Making Vixen's character more ‘edgy’ was an attempt to bring a different kind of energy to the team.”

Patton continued, “Gerry's description of her stayed basically to how he created her— same as before—but he was open to however I wanted to visually interpret her. So first thing first—I needed her looking more earthy and sexy—so I changed her colors to an earthier color palette—to denote not only the fox aspect of her identity but also her African origins as well… I wanted her to be majestic, powerful, and roguish… However, a 'vixen' isn't exactly known as such a creature. So I turned to Marvel Comics for inspiration. I revised her hairdo to reflect a wild animal approach, again utilizing a fox-like image, but I didn't want her wearing a mask and becoming a black Catwoman... What I was going for was to literally make her a female Wolverine… Hey, I was young and fairly impressionable back then… I was also using Grace Jones as my real-life model for Vixen—and Grace wore many a wild wig in her day! …Of the new Justice Leaguers' outfits I created, I was and still am most proud of Vixen.”

I agree with Patton’s assessment, even though it may seem like damning with faint praise, given the company. I really do like the suit, and despite the similarities to Timber Wolf and Wolverine, I wish she had retained more of Patton’s contributions through successive reworking. Regardless, the fact that Vixen has managed to stay in print for most of the years since her reintroduction is certainly a credit to Conway and Patton. Also deserving of credit is John Schwirian for his excellent write-up, available in full here.
Posted by Diabolu Frank at 1:55 AM