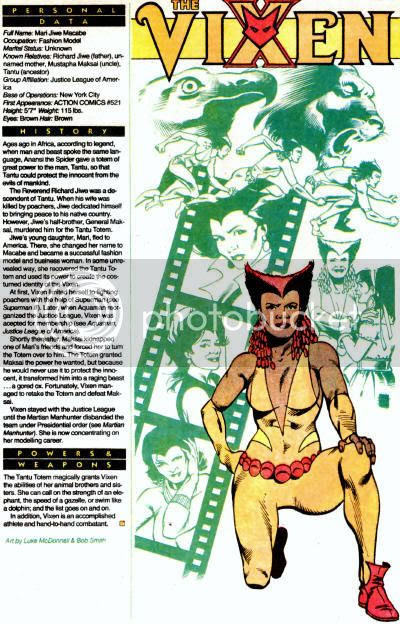 I was introduced to Vixen back around 1988 or so through discount copies of "Suicide Squad." I always liked her look, but her personality never seemed strong enough to match. After her second team book was canceled, I'd see her here and there, too often in that awful purple get-up that made her seem all the more bland and trivial. It occured to me she was basically the stock black female of the DC Universe, a pale Storm imitation trotted out to say, "Look, we have black heroines too! We just hide them out back in the shed!" Oh no, DC doesn't practice tokenism while avoiding viable minority characters like the plague, right? That's about the only praise I can give Dan Didio, as he's clearly pushed DC out of its entrenched, institutionalized racism.

Back to Vixen, after all those years of dismissing the character, I finally had the opportunity to learn what she was really about through her Justice League appearances. I found her vivacious, capable, and one of the great pleasures of the Detroit years. I suspect part of the problem with her "Suicide Squad" appearances was that J.M. DeMatteis had given her a similar arc to the one John Ostrander intended for Bronze Tiger, rendering Vixen as just "the girlfriend." Moving on, my interest in Vixen expanded thanks to the excellent design work and vocal talent of Gina Torres on the "Justice League Unlimited" cartoon. I'm pleased her appeal has been recognized at DC proper on the relaunched "Justice League of America," though I'm disinterested in the book, but her upcoming mini-series is one of the few things DC has me looking forward to these days.

Art by Luke McDonnell and Bob Smith.
Posted by Diabolu Frank at 12:00 AM