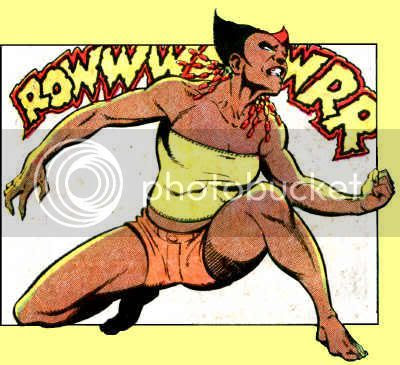 Professor Ivo: Continued to be conflicted by his own murderous actions, seeing visions of himself in a padded room. The Ivo in a straight jacket thought Amazo was a silly name, was saddened "A Martian killed my son," but felt he couldn't himself have killed anyone. "Murder is a sin. Bad. Bad." The Ivo in a tux continued to argue with his android "psychiatrist," before deciding to trigger its self-destruct mechanism.

Dale Gunn: Drank a toast to Steel with the boy's grandfather and Martian Manhunter. Watched J'Onn J'Onzz toss his drink to the floor, cursing "Damn it!!" As the Martian slumped against a wall, Dale explained, "J'Onn? Listen to me. I knew Hank since he was just a kid. I've been working with his grandfather for more years than I'd care to count. We're all hurting, but there's nothing to be gained by throwing fits. Hell, what I know of you-- this just isn't your style."

Martian Manhunter: Answered, "My style? Dale-- you don't know what my style is. And neither does Ivo. I've never wanted blood so badly in my life."

Commander Steel: After analyzing the android that killed his grandson, devised means to track other androids with the same power source.

Martian Manhunter: "Before this day is out, Hank will be avenged."

Dale Gunn: Halted J'Onn J'Onzz's intended departure to deliver a speech. "I thought the name of your team was the Justice League... not the Revengers. Justice means you find the ones responsible for what's happened, and you let the law take care of it. Revenge isn't justice, J'Onn. You know that. Revenge goes against everything you and the Justice League stand for."

Martian Manhunter: "The League is dead, Dale-- or hadn't you noticed?"

Vixen: Continued to stalk New York's rooftops. "Dead. Can he really be dead? Steel? My friend? If he's dead, it's my fault. I knew what the situation was. G. Gordon Godfrey turned the whole country against us. Yet I let Steel go out there... No... It's not my fault. It's Ivo's fault. And I'm going to find that murdering scum-- and he's going to pay." Dropping to a subway entrance, a group of bums made their way toward her. "Predators. They think I'm a woman. They think I'm something that can be taken, used, and discarded. But I'm not a woman. I'm Vixen. I'm a panther. An elephant. A vulture. A snake. I'm whatever animal-spirits I need to be to hunt my prey. To hunt-- and kill."

Vixen continued to wrestle with her bestial drive and more reasoned humanity. "I'm not an animal. I'm Mari McCabe. I'm a fashion model. I'm a woman." This didn't stop her from roaming barefoot in a New York sewer, beating rats to death as an aggression vent. Finally, Vixen located the underground headquarters of Professor Ivo, who greeted her with a poisoned meal. While Ivo was terribly civil, Vixen offered him a variety of means by which she could kill him, and threw tainted coffee in his face. "I'll feast on your dead flesh... How stupid do you think I am! You think I'll just sit here like a good girl and drink my cup of hemlock?"

While Vixen battered the immortality-ravaged Ivo, a dozen of his pretty shirtless androids appeared to wrestle her to the ground. Vixen destroyed several of them, but their programming was altered to specifically target her weaknesses. She was drowned in numbers.

Martian Manhunter: "IVO!!" J'Onn J'Onzz smashed his way into the Professor's lair, who stammered, "No! Not you! You're one of the real ones! You always beat me!" J'Onzz emphasized, "To a pulp." Learning of Vixen's plight, the Manhunter barreled through all but two of the Ivos before the Professor came to a realization. "Oh, of course! He's a green man from Mars. And Martians can't abide fire." The Professor then lit up J'Onzz with a tricked-out lighter. "I knew I carried this with me for a reason. You can't hurt me now, Green Man... Now I would deeply appreciate it if you'd die."

Vixen: The two remaining Ivos could find no pulse, heartbeat or respiration, but just as they were prepared to certify she had expired, Vixen came alive. She smashed the pair.

Vixen: "I can!!" Vixen tore Professor Ivo's head off... not clean, as various wires and other mechanical bits left it dangling. "This 'droid was extremely sophisticated. It even mimicked the scent of a living man." She caught the real Ivo's scent behind a door, and found those visions of the Professor in a padded cell were factual.

Professor Ivo: "He escaped from Arkham Asylum, built an army of androids, even created a near-perfect duplicate of himself to fool the authorities with in case he was discovered. And yet, he was totally insane." The androids' minds modeled after Ivo's, they too were filled with madness and conflicting impulses, and locked away their own imperfect creator in a new cell. "Indeed. He pushed them to murder. While his soul burned in shame."

Martian Manhunter: "I find it impossible to hate someone so filled with remorse... so lost and anguished. And I feel such a need to hate. Such a deep need... Mourning. And forgiveness. And something more... I see it so clearly. Let the President and his orders go to hell. Let every man, woman and child in this nation come to loathe us. But, in order for Steel and Vibe's deaths to have any meaning-- the League must continue. Politics and opinion shift. Tomorrow we may be heroes in the eyes of the world again. But that doesn't matter. What matters is that we are duty-bound to do our job, despite praise or blame. Fate took me from my homeworld... brought me to this earth for a reason: To help. To fight for what's right. For justice. And, for the sake of justice, the League must never dissolve. We've got to go on.

Vixen: "I looked inside myself these past few days. I saw a demon... a demon that had to be exorcised. And I did exorcise it. Vixen died... For the first time in my life... I'm truly, wholly-- Mari McCabe." Mari wasn't sure if G. Gordon Godfrey wasn't right, considering the violence that surrounds super-heroes, and the deaths of her friends. "We choose to live like this! We choose this bloody path! There are a million ways to help people, to make the world a better place... ways that don't have anything to do with fists and suns and corpses... I don't intend to beget any more violence in this lifetime, JJ. I want to be free of the animal, and embrace the human. Maybe the League should continue. But it won't continue with me... I'm sorry. I didn't mean to sound so... judgmental."

Martian Manhunter: Tried to convince Vixen to remain, but acknowledged her path led elsewhere, and hugged her goodbye. J'Onn stared into a monitor bank at the Secret Sanctuary for a time... into the faces of the departed Gypsy, Vibe, Steel, and Vixen. An emergency signal sounded, and the Manhunter from Mars was off.

Gypsy: Retired from super-heroics to return to her family and school, for now.

Vibe: Family in mourning, including a younger brother who will develop similar powers.

Steel: Grandfather shut off life support, but for good?

Vixen: Her hiatus from the life will be short, but she will return in very different company.

The Creators: J.M. DeMatteis did wonderful work here, and his take on madness hints at what would become one of his most famous stories, the Death of Kraven the Hunter. It's no wonder editor Andrew Helfer asked him to stay on for the Justice League relaunch. Bob Lewis provided inks in a style reminiscent of Terry Austin, which set him apart from any of the others on this arc. This was some of Luke McDonnell's best work, but his style would soon change with his moving on to Suicide Squad. These were not the characters or situations one would expect to close out over two decades of JLA comics, but the story was well told regardless