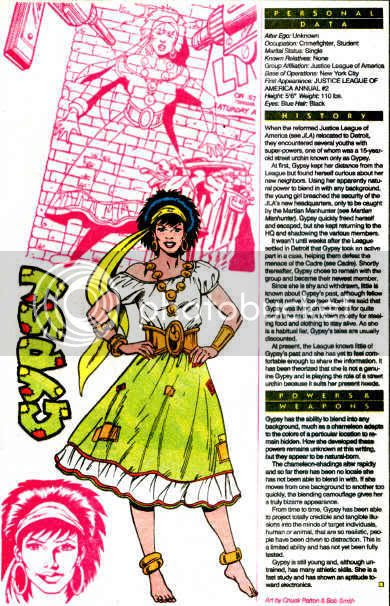 Like most of the new Detroit League, my first reaction to Gypsy was "eh." Since I had dropped JLI before her appearances there, I first made her acquaintance in the first issue of "Justice League Task Force." Like I suspect a good many readers at the time, my thought was "who is this person?" She kept popping up though, and I started raiding back issues, filling in the gaps of my knowledge. I paid special attention to Gypsy in light of her connection to J'Onn J'Onzz though, and with time his affection toward Gypsy rubbed off on me.

I believe the character has a great deal to offer now, and in retrospect I find her very influential. She was like the anti-Kitty Pryde: Secretive... spiteful... sarcastic... as often the cause of problems as the solution... quite often the damsel in distress very much needing a save from teammates. No Wesley Crusher showboating for Gypsy!

I can see where that wouldn't play with fans of the Justice League in the mid-80's, but I can just as easily see the genesis of characters like DKR's Carrie Kelly, the X-Men's Jubilee, and every other Joss Whedon creation. While I can understand her Cyndi Lauper/Stevie Nicks/Madonna shtick rubbing people the wrong way, I find it interesting that she's one of the very few super-heroes dating back a quarter century for whom snarky dialogue is entirely appropriate, as opposed to forced. She was both behind and ahead of her time at once.

I don't know that I'd be as excited about a Gypsy mini-series as I was Vixen, but still, a character deserving of less animosity and even, dare I say it, TLC? I imagine Gypsy being a "Cloak & Dagger" type for the DC Universe-- a street-level heroine dealing with teen runaways, junkies, alternative lifestyles, and prostitutes alongside a helping of "teh wierd." You may laugh, but try to remember Gypsy counts Lady Shiva, Vandal Savage and Despero amongst her personal foes, and still carried a membership in the Birds of Prey last I heard. You've come a long way, baby...

Art by Chuck Patton & Bob Smith.
Posted by Diabolu Frank at 12:00 AM