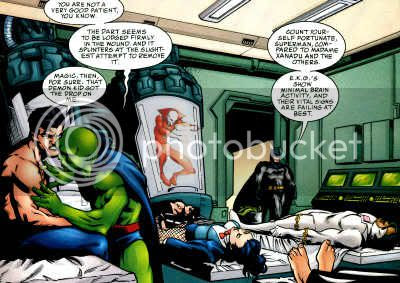 Zatanna: After the Day of Judgment, which altered the status quo in Hell and saw the formation of the Sentinels of Magic, Zee's profile rose sharply. Along with other Sentinels, she was attacked by mafia-styled demons calling themselves "the Diablos," who intended to sacrifice the magical heroes to resurrect more of the infernal fallen. Among them was "Anita Soulfeeda," a succubus who partially fed off Zatanna before being interrupted by Superman and Plastic Man.

Superman: Shot by poseur rhyming demon D'Monix with a magical gun that embedded a homunculus inside his body.

Martian Manhunter: Tended to Superman at the JLA Watchtower infirmary. "You are not a very good patient, you know. The dart seems to be lodged firmly in the wound. And it splinters at the slightest attempt to remove it." Others patients included Zee, Deadman, Madame Xanadu, Ragman and Bloodwynd. "Zatana's not responding. I am going to attempt a mind probe... She's hiding herself in a perverted version of her library."

Zatanna: Spouted gibberish on the psychic plane, from which she expelled Manhunter, after he assumed the appearance of her father.

Martian Manhunter: "No use. When that succubus drained half of Zatanna's soul, she was left on the brink of madness. I fear for those for whom the spell was completed..."

Batman: Initially refused Wonder Woman's suggestion that Faust, semi-heroic son of Felix Faust and an expert on soul magic, should be brought in to help. Relented, but ordered the injured Superman to inactive status pending recovery.

Wonder Woman: Visited the Scrap Bar, an underground club for freaks and misfits in Detroit, and a regular hangout of Faust. She found him in the company of Rose Psychic, receiving a piece of the Fountain of Lessing. Joined by Plastic Man and Blue Devil, the group questioned Samhain Diablo about his association with the Diablos. The group then joined Aquaman in a battle against the gang near Greenland.

Aquaman: Fought Scratch, a large shape shifting demon. Unable to defeat it, nor stop the Diablos from making off with the Fountain of Lessing, nor save the underwater city of B'miria. Faust allowed Tempest access to the knowledge of lost B'mirian sorcerers, which took Aquaman's ward out of the fight for a while. Meanwhile, the moon sprouted wings and a cyclopean eye.

The Creators: Writer Ruben Diaz was an assistant editor to Brian Augustyn and Paul Kupperberg in the 1990s before moving on to full duties, most famously overseeing the 1997 relaunch of "JLA." Diaz jumped ship to Marvel before fully reaping the benefits of that effort, then reappeared at DC as a freelancer before quitting comics for teaching. This mini-series represents his only major work as a writer. This first issue was respectable at establishing a threat to scale with the deified JLA, thanks largely to the vagueness of magic and our heroes vulnerability to it.
Posted by Diabolu Frank at 2:00 AM