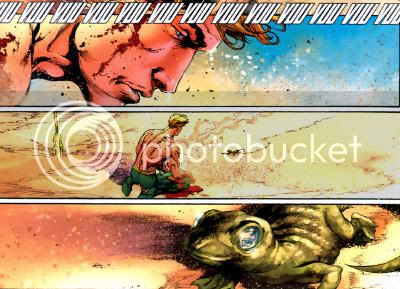 At the Amnesty Bay lighthouse, Arthur couldn't sleep, thinking about the Trench. A call came in from Commander Clay of the U.S. Navy. An artifact resembling the "A" on Aquaman's belt buckle had been found embedded in the cocoons Curry had unearthed, and was emitting a horrendous, glass-shattering racket. Aquaman was asked over to check it out. Soon after, armored enemy combatants raided the base and took the artifact. Aquaman chased them to their aircraft, tore into the hull, and engaged. Punching the facemask off one, Aquaman found it full of water, and suspected he was fighting Atlanteans.

A leak in the craft caused an explosion, sending the Sea King flying to a rough landing in the desert. Aquaman ripped a piece of shrapnel out of his leg, then retrieved his trident. Arthur saw visions of his father, who criticized his life choices. Aquaman called for help telepathically, but only a lizard showed up. He eventually located the airship's wreckage and the artifact. Dipping it into the water of a helmet, a projection of an ancient armored Atlantean appeared. This figure spoke of the Trench clawing their way through the hull of his ship, and how a great enemy of Atlantis was plotting to sink it. "Because of the king and queen. They hid the truth from us." Message ended.

A Navy helicopter picked up Aquaman, and the rescue made him a laughingstock on the news. Returning home, Arthur found a note from Mera, who'd gone to town for dog food.

"Lost" was by Geoff Johns, Ivan Reis, Joe Prado and Eber Ferreira. I'd say it was the strongest single issue of the book yet, as the non-linear storytelling was novel, not that you could tell from my straightened-out synopsis. Lovely art, high adventure, character work, and a prelude of things to come. Plus, the lizard was adorable!

Hey Frank. I'm tweeting as @RafaRivas2099, are you on Twitter?

Away from me, all ye twitterlings! I shall not abide all these nattering inductions. Get the behind me, foul Twitter! It is not heresy, and I will not recant!