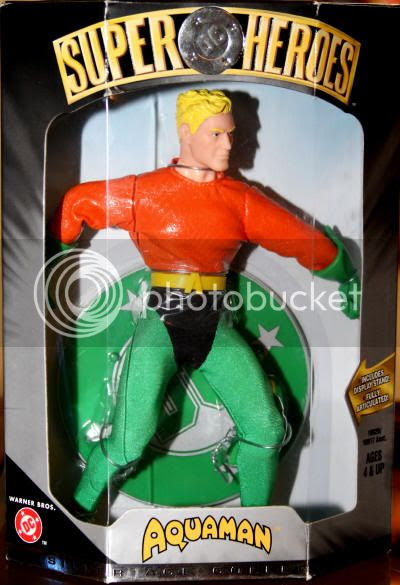 Marvel Famous Covers dolls were doing good business in the late '90s, but they all had jacked-up "extreme" faces that killed my interest. They all seemed really, really upset about something, and when the corners of Gambit's mouth nearly touch his Adam's apple, you're doing something wrong. Still, the line was popular, so Hasbro came up with not one, but two copycat lines for DC characters, JLA and this one. All three had Mego in their DNA, of course. The Silver Collection was meant to show off some old school heroic looks, and they had much nicer boxes overall than JLA. Green Arrow, Green Lantern, a "New Look" Batman with removable mask, and an alternate two-pack with Robin were also part of the group. The figures were going for $15 or more each (I think I remember the Silvers having a pricing premium,) so I waited until just a couple of years ago to buy this Aquaman. As it happened, I caught him on sale at a local comic shop for $7.50.

Marvel Famous Covers easily had the best packaging of the three, but the superior of the two DC lines comes down to aesthetics. They both had plain backgrounds and a downright kinky number of visible straps holding the heroes in place. The design of the Silver Age Collection was showy, with silver foil embossing, spot varnish, and each character's trademark logo on their box. They also had more detailed information on the back of the box. On the other hand, JLA's more slender box had its virtues, and there were character drawings on the sides. The important thing to remember is that Aquaman looks fantastic in his box, and from experience, it is a huge mistake to take him out of the box. 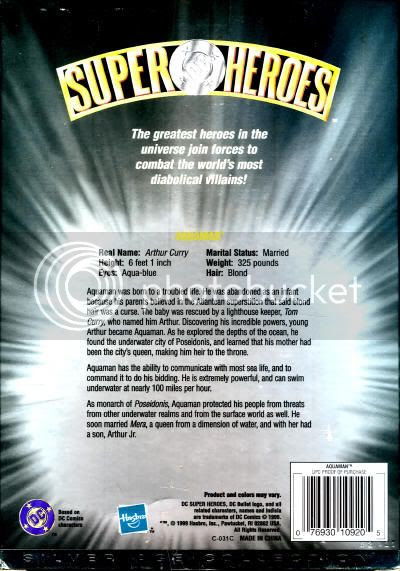 The back of the box starts almost verbatim with the same boilerplate material as found in the JLA line...

The greatest heroes in the universe
join forces to combat the world's
most diabolical villains!

Aquaman was born to a troubled life. He was abandoned as an infant because his parents believed in the Atlantean superstition that said blond hair was a curse. The baby was rescued by a lighthouse keeper, Tom Curry, who named him Arthur. Discovering his incredible powers, young Arthur became Aquaman. As he explored the depths of the ocean, he found the underwater city of Poseidonis, and learned that his mother had been the city's queen, making him heir to the throne

Aquaman has the ability to communicate with most sea life, and to command it to do his bidding. He is extremely powerful, and can swim underwater at nearly 100 miles per hour.

As monarch of Poseidonis, Aquaman protected his people from threats from other underwater realms and from the surface world as well. He soon married Mera, a queen from a dimension of water, and with her had a son, Arthur Jr.

Jeebus! That was a Who's Who entry! 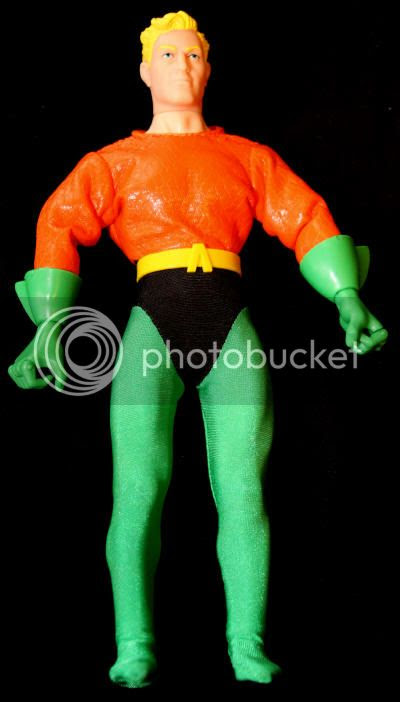 As announced on the box face, the doll is "FULLY POSEABLE WITH ARTICULATED FINGERS!" Unfortunately, what he really should have had to grasp was a trident, but no such thing was included. I guess he could hold a fancy plastic fork instead. This is the Silver Age Aquaman, so he has the modest black trunks, which is still leagues better than the Golden Mullet pirate look used for the JLA figure. Dig that belt! 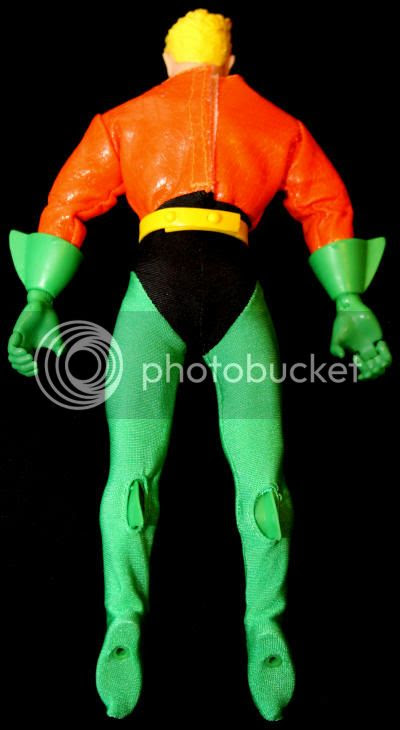 From behind, you can see that the belt is securely fastened and easily removable. The suit is held shut by a proportionately ginormous wedge of Velcro, so avoid displaying from this angle. Note the open slits to allow breathing room for Aquaman's calf-fins, a nice touch that I'm glad the toymakers remembered. Also observe the peg openings at the bottom of the feet, secured by glue. Again, very thoughtful and pragmatic. 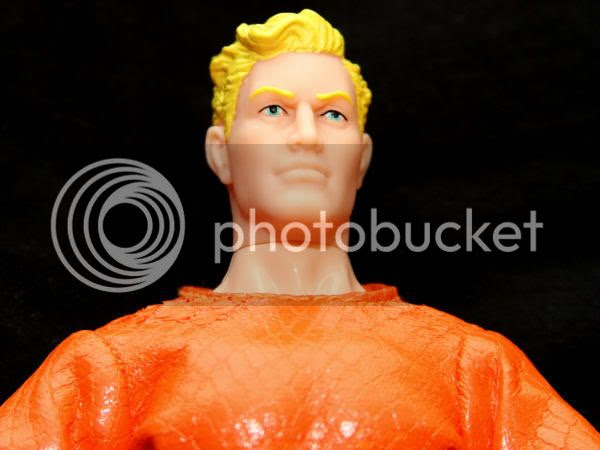 I decided to offer a larger view of the face for a better look, and because this is where my true bitching begins. As you can see, the head is nicely sculpted, I really appreciate the smile, and the piercing blue eyes are appropriate. However, Aquaman looks a bit "mature," doesn't he? I always picture the Sea King as a pretty boy, where he's kind of rugged looking here. 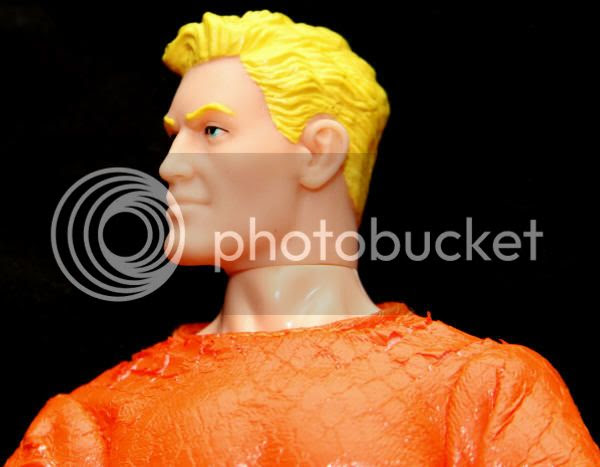 I'm sure the hair is meant to have a tussled "underwater" look, but what it really reminds me of is Katar Hol as drawn by Joe Kubert. In profile, it's hard to miss those disproportionate ears and a beak-like quality to Arthur's nose and mouth. Even the blond hair reminds me of the Golden Age Carter Hall. What I'm saying is that this is a good unmasked Hawkman head on Aquaman's body. 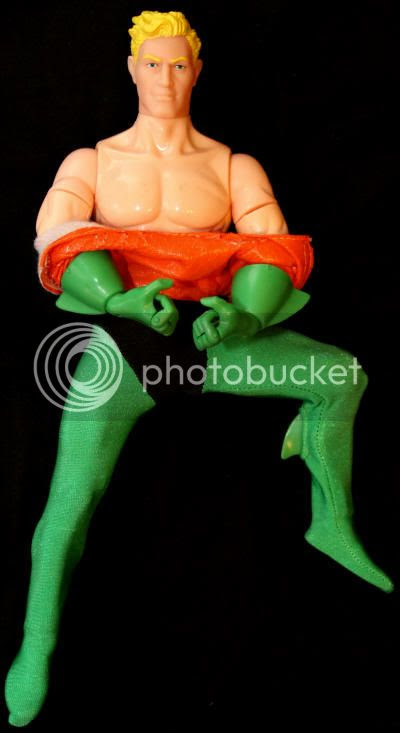 What appears to be beefcake above has a point. Aquaman has the same basic body as the other Hasbro nine inch figures, but his arms are permanently akimbo because the padding in his shirt is too thick. For the same reason, the arms move awkwardly, and posing the upper body is problematic. The "gloves" are especially tacky looking, better resembling water wings. They're glued on, so you cannot actually remove Aquaman's costume. 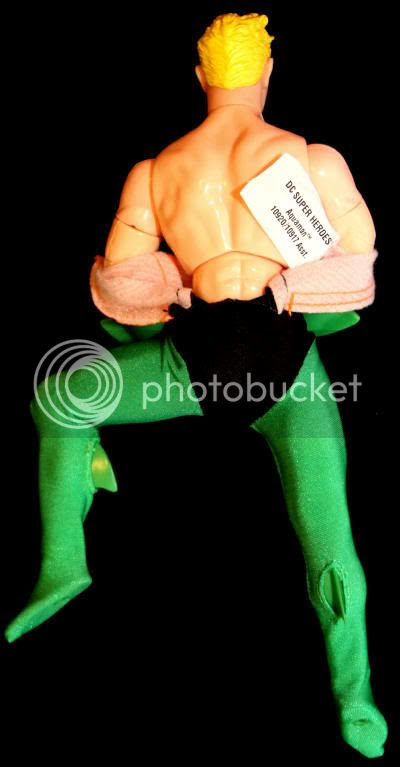 I partially removed the costume one time to display the tag and construction underneath. Unfortunately, the rubber gunk they used to make his top look shiny, combined with some nigh imperceptible embossing, meant the top was immediately ripped to shreds. The rubber frays and streams from even simple arm movement, so unless you're looking for battle damage, you cannot actually move any part of Aquaman's upper body. Man, I hate toys that were clearly not constructed for anyone to actually play with. Makes me miss the silly Mego painted on "chainmail." 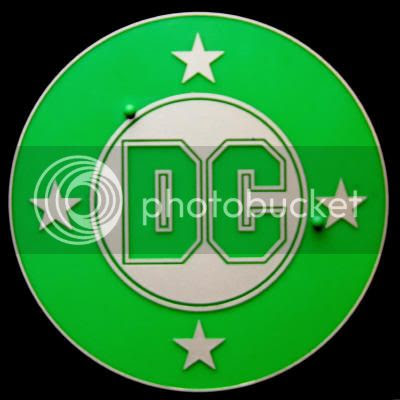 Here's the stand that came with the figure. Hasbro was clever in that three of the characters selected for this line had green prominently in their costumes, so for all I know they all got the same base. The articulation on Aquaman's lower body is mostly unhindered, but the stockings over his feet mean you'll need this stand if you want to keep the Monarch of the Seven Seas from falling on his royal patootie. 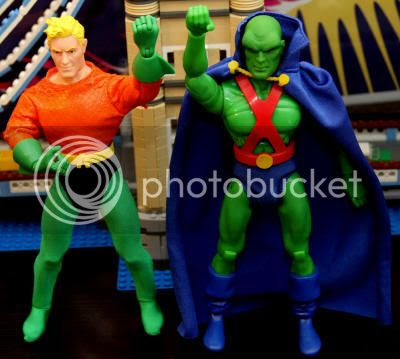 Aquaman is a solid figure that looks great in the box and should never be removed from his box. If you want something to play with, I'd recommend the 1999 Hasbro JLA Justice League of America Martian Manhunter 9" Doll instead...
Posted by Diabolu Frank at 12:00 AM