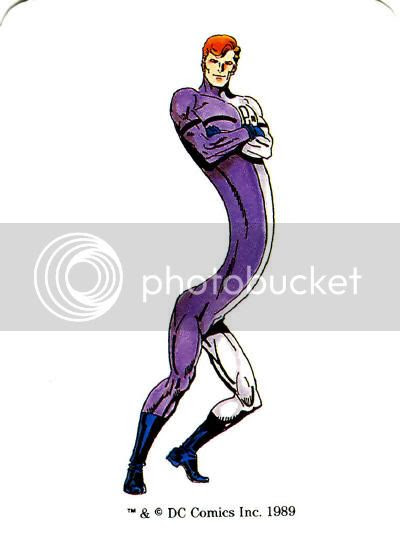 This is a good looking card, no? I like when Ralph is shown to have solid muscle/anatomy that is only distorted when he elongates with a specific purpose (beyond perpetually looking goofy.) He's got an heroic face that recalls Jim Aparo, which is hardly ever a bad thing, and I much prefer the purple & white suit.

You know, I've long felt that stretching characters deserve more respect than they get. Elongation is a fantastic power that could be used for reach, strength, evasion, acrobatics... the list goes on. So what do the great minds of comics come up with? Rubber balls, parachutes, and twitching noses. Ugh. 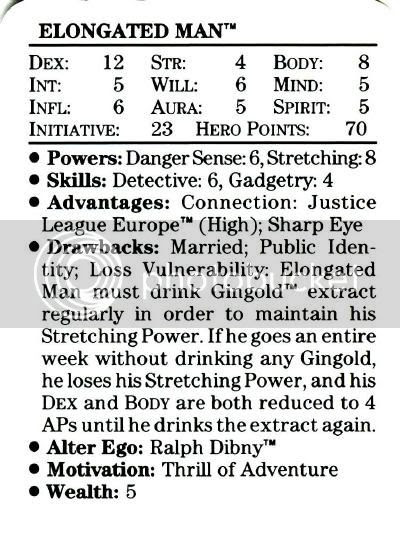 Check that Dexterity of 12. That is massively effective in the role-playing game. The Stretchable Sleuth may not have a lot of muscle behind his blows, but he can connect with great facility. That rare appearance of Detroit favoritism rears it's sunny head again, because Elongated Man owns Plastic Man in this game. Ralph's bodily durability is better suited to street crime than League levels, but it's still nothing to sneeze at. I'd say Ralph's I.Q. is about right, especially given the separate Detective Skill of 6, but his so-called Emotional Intelligence is too much. You don't need an Influence of 6 when you're second string in the Motor City League. Maybe Gerry Conway favored his own creations, but when Vibe and Steel consistently show you up in pure personality? Double ugh.

Belated thanks to Tom Hartley, whose offering of a batch of about 30 character card scans was the taste I needed to seek more. He then sold his box set for a very reasonable price to a poor student to facilitate this crossover, because I just had to scan them all for myself.

The nose twitch is a seperate power (Danger Sense) and represent when he would 'smell a mystery'. It's delightfully charming in an old fasioned kind of way. ;)