While looking into oversights in Comics Should Be Good's 75 Most Memorable Moments in DC Comics History, I went over the publishing lives of each member of the Detroit League. Aquaman will be the easiest to fill out, as he's lived an eventful, pioneering life in comics. Fully a quarter of all nominees to the CSBG list were Batman-related, and if anything was missed, I'll try to uncover it down the line. Outside of the types of folks that visit here, Steel and Vibe's only possible notoriety came at their deaths, while neither Vixen nor Gypsy even have one of those. By my own definition, Elongated Man and Zatanna moments are a bit of a stretch, but I've got to pull something out of my hat in the name of the team. These and other highlights from DC's three-quarters of a century will be collected at DC Bloodline's Truly Most Memorable Moments of the Dodranscentennial. 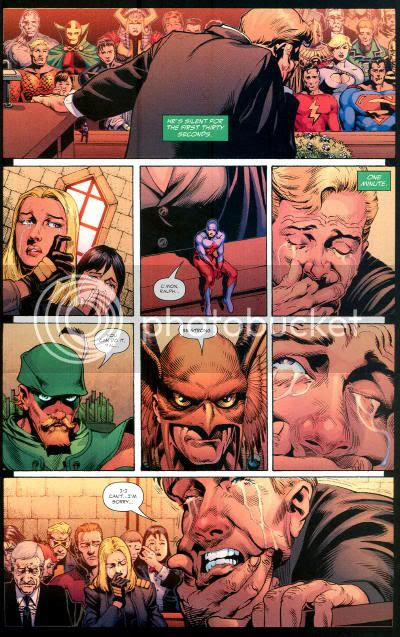 In retrospect, Elongated Man's being on the awful Michael Turner cover for Identity Crisis #1 alone should have been a major tip-off. Certainly Ralph's sharing his and Sue's romance at length with a random super-heroine had the alarm bells clanging. Still, I figured it meant one of my favorite supporting characters was about to go back on the dating market. As more attention was given to Sue's being alone in her house with an intruder, a realized the worm was turning, and worried for the girl. She died horribly, and the terrible revelations wouldn't end there. I don't spend a lot of time thinking about the circumstances surrounding the end of Sue's life, though. The images that sit in my mind are of Elongated Man's inability to maintain his very pliable form at Sue's funeral, driving home the point that what set Ralph apart from every other super-heroes, not just the elastic ones, was the depths of his relationship with his wife. Once she was gone, what was there left for him.

While I won't be submitting the image as an all-time memorable moment, the instance in this book, and really this series, that rests in my heart is of Sue cupping Ralph's hand and pressing it to her cheek, she and Ralph worlds away from the lousy existence of modern super-heroes. 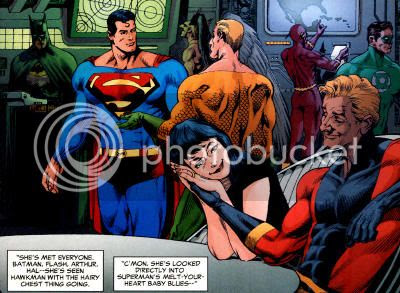 You know what I think is really clever (and sweet) about that last panel? Even though Sue's in a room along with Aquaman, Hawkman, Batman, The Flash, Superman, AND Hal Jordan, she only has eyes for Ralph. That's true love for you.

Well, he does have the best power in the field of super-husbandry. Could you imagine the scary medieval crap in Katar Hol's toybox?