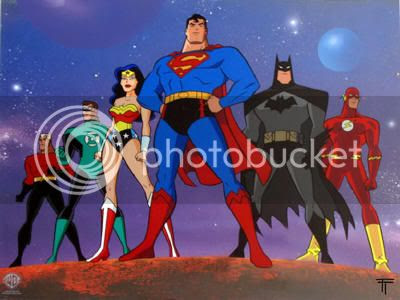 After Batman: The Animated Series and Superman's follow-up, everyone was waiting for Wonder Woman and/or the Justice League of America's turn. Certainly there was a lot of proposal art from production designers like Bruce Timm floating around. Tommy Tejeda also had his turn at bat, rendering a fairly typical general audiences League in line with the founders/Super Friends model. No minorities, the mandated female, and certainly no unknown quantities like the Martian Manhunter or Hawkgirl. I like this clean, classic line-up as a single image, but it's much too safe to inspire confidence in a new cartoon series. Where's the tension and unpredictable dynamics? Plus, I vastly prefer John Stewart to Hal Jordan, and the actual show was essential to the turning of J'Onn J'Onzz into a household name. Aside from the Aquaman snub, I'm all the way behind the team actually used on the show.

For more by Tommy Tejeda, check out his blog, Vibrational Frequencies. I'm also having a spotlight at my blogs, so give 'em a look.