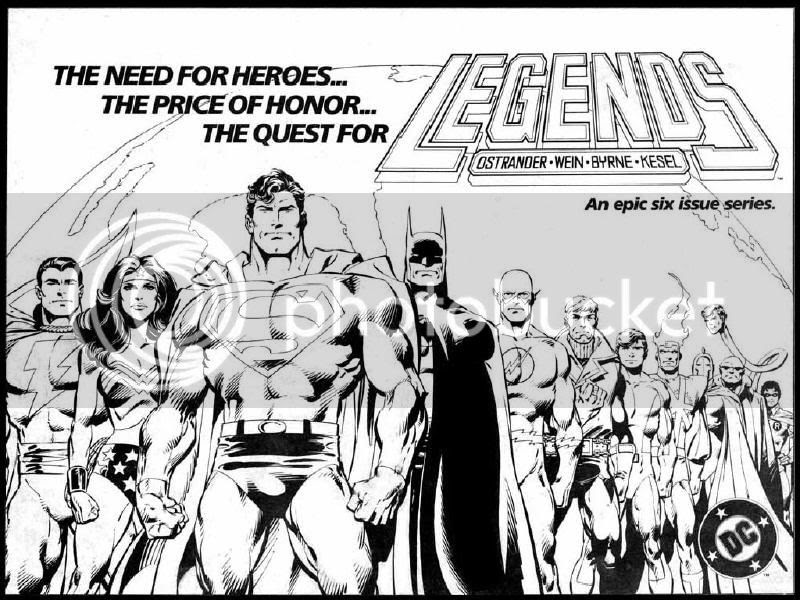 This black and white ad by John Byrne and (I assume) Karl Kesel ran here and there back in 1986, but Byrne's arrival at DC and its being the follow-up to Crisis On Infinite Earths had the book pre-sold as a hit. In retrospect, it was pretty hokey in execution, with little long term consequence, and fares poorly when read today. Still looks pretty, though. Also, Ralph Dibney in a group publicity shot? How often does that happen?
Posted by Diabolu Frank at 9:30 PM

Dude - This is friggin' sweet! I love me some John Byrne and I love me some "Legends". Any hokey bits, and poorly written parts... just gloss over them. I loved it back then, I'm bias and love it now. I'm comfortable in my biasness.

This black and white ad by John Byrne and Karl Kesel ran here and there back in 1986, but Byrne's arrival at DC and its being the follow-up to Crisis On Infinite Earths had the book pre-sold as a hit,But this is creepy video.

I always thought that it was very odd to see Ralph's head there. The Martian returned to save the day, but Ralph beat it after the fist defeat like the rest of the Detroit league. My theory is that it always look good to have a stretcher in superhero crowds.

I scratched my head over Manhunter for a second before I remembered the debt Ronald Reagen owed the Alien Atlas. The featured characters are otherwise representative though, which makes me wonder if perhaps Ralph was intended to play a bigger role. Maybe they expected him to be on the new Justice League? Maybe an interview with Len Wein or John Ostrander is in order?