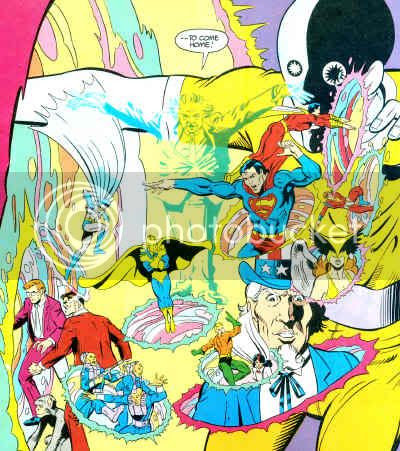 On his deathbed in 1955, Albert Einstein solved "der great mystery! Der concept of der Unified Field. I am now unbound by der reschtraints of time!" This gave Einstein extraordinary power over reality.

Batman: On the planet Rann, the Caped Crusader and Hawkwoman wondered after Captain Marvel and Dr. Fate, lost elsewhere. Batman went on the prowl, but stumbled into a warp hole. Einstein had brought Batman to the Plane of Holes "to make sure I could properly coordinate between planets dat are light-years distant!" For no discernable reason, Einstein then sent Batman to a jungle, where black savages attacked the Darknight Detective with spears. Robin the Boy Wonder showed up on a Whirly-Bat to pick his mentor up, but turned out to be a demon in disguise, and dropped the Caped Crusader into an active volcano.

Aquaman & Zatanna: Had a cameo appearance together in the Plane of Holes by Einstein's will.

"A Matter of Anti Matter" was perpetrated by Elliot S! Maggin, Dan Jurgens and Larry Mahlstedt

You can now read synopsis for the full issues of DC Challenge at our big brother blog ...nurgh... Reader discretion is advised...