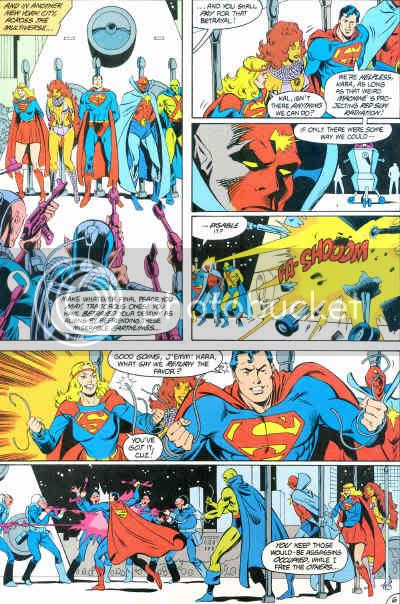 Martian Manhunter: Back in New York City (or is it Metropolis? I'm confused,) the invaders prepared to publicly execute our alien heroes. Supergirl and Superman were helpless so long as a weird machine projected red sun radiation about them, so Jemm silently blasted it with his tikka jewel. "Good going, J'emm! Kara, what say we return the favor?" The Girl of Steel released the Son of Saturn, Manhunter from Mars and Starfire. Superman announced, "together, we'll show that these no-goods don't speak for all aliens!" The Maid of Might added, "When we're through with 'em, they'll be lucky to mumble!"
Posted by Diabolu Frank at 4:00 PM

One of the often overlooked legacies of the Detroit team was the return of Martian Manhunter. Growing up in the 1970s (in the age of "Superfriends"), I didn't even know who he was until the Detroit-team era (much less that he was a founding member of the team).

Indeed! And I'm glad for it!