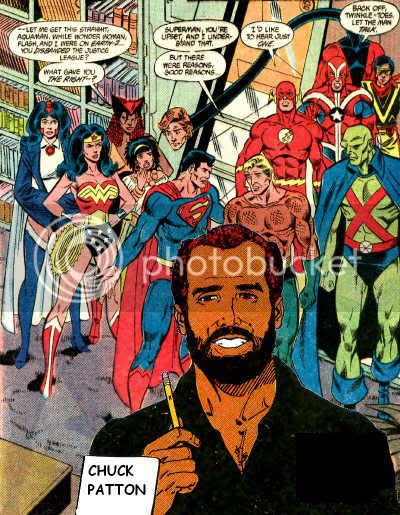 Back in February, I decided to do a creator profile for this blog on Chuck Patton, the criminally under-appreciated co-creator of the Detroit-era Justice League. Patton has since moved on from comics, but after stumbling upon my humble blog, we had a brief dialogue. I love Patton's work, and told him so, but between my anti-social tendencies and minor virtual presence, I wasn't inclined to do anything myself to take advantage of my good fortune. However, I know Rob Kelly's a swell guy with a heavily trafficked series of blogs. Further, Rob is also a Patton fan, as he's mentioned at his Aquaman Shrine and sadly discontinued JLA Satellite blogs. Most importantly, Rob's a great interviewer, and I knew he could get Patton the coverage he deserved, and me the article I wanted to read, without actually doing the work!

The short version is that Patton drew the most iconic Justice League of America this side of George Pérez or José Luis García-López, so of course the 1980s dictated he'd soon get stuck with breakdancers and cyborgs. Also, I suspect from what I read, someone in DC editorial must have blackballed Patton. This guy did fantastic work, and would have been a boon for any title that would have him, but he's losing jobs to Ed Barreto and Paris Cullins? Both of whom I like, but still... Barreto was a terrible fit for New Teen Titans, where Patton could have buoyed it after the mismanaged transition to Direct Market Only. Visions fill my head of Patton following Pérez on Wonder Woman instead of the awful Chris Marrinan... Detective Comics under Patton instead of Graham Nolan... maybe Green Lantern and Aquaman could have held down series in the 80s with Patton on board? Oh, how I weep for the possibilities...

Anyhow, Rob and Chuck Patton were a fine pair, though I was disappointed by the lack of Detroit coverage. Patton is on record as (understandably) hating Vibe, but no mention was made of Steel, Gypsy, Vixen or even Zatanna. Patton and Kelly shared love for Aquaman, and Elongated Man got name-checked as well. My favorite, Martian Manhunter-- not so much. But of all his creations, Patton spoke at length only of Dale Gunn. I always liked Dale, but where he was presented as a Steel supporting character, he was conceived in the Batman/Green Arrow mode. I blame the hairline.
Posted by Diabolu Frank at 11:45 AM