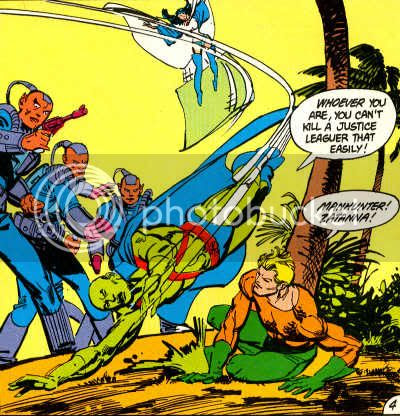 Batman: Hung with Hawkwoman from a branch on the side of a Peruvian jungle cliff, until Adam Strange lept to grab the same. The limb snapped, but as Adam had planned, the trio just fell into the Zeta-Beam to Rann that brought Strange there in the first place. On Rann, the heroes joined Viking Prince, Sardath, Alanna and Superman in battling mythological monsters.

Aquaman: In the Sahara Desert, the Sea King was surrounded by pointy-eared aliens. "We will indeed end the 'menace,' Aquaman-- and you will be one of the most important tools we shall use! ...Just as we took knowledge of the JLA from your mind to 'borrow' their shapes-- we used your signaler to call your comrades! There are several among them who can be important pawns in our game-- for they are traitors to our cause! ...Some of your comrades are no more 'people' than I am, Aquaman! Your purpose is concluded, human. You are now irrelevant, and may prepare to cease existence."

Martian Manhunter: "Whoever you are, you can't kill a Justice Leaguer that easily!" The Alien Atlas flew into the aliens line of fire, shielding Aquaman with his own body.

Zatanna: Teleported with Martian Manhunter. "You didn't think we'd ignore our leader's summons, did you, cutie? Besides, I haven't been to Egypt for years, and the sight-seeing's great!" Zee tried to apply her sorcery to the aliens, but it wouldn't work. "The power of magic is no longer so great, woman-- and soon will be gone entirely!"

Martian Manhunter: Screamed "AYEEEIIIII!" when confined in an energy cage projected from an alien's ray gun. Spirited away through a portal in the sky with the other extraterrestrials. "We will let you live to ponder that knowledge-- for we have the traitor now-- and although your powers may be sufficient to allow you to survive, you are, as we said, irrelevant. Hardly worth bothering to kill."

Martian Manhunter: The aliens conquered New York, and took captive J'Onn J'Onzz, Supergirl, Superman, Starfire and Jemm: Son of Saturn, who were tied to poles for a public execution. "The independence of this planet has ended! You are now to be a part of the Greater Galaxies-- and these aliens who have lived among you shall be the first to feel our justice! For having dared fraternize with you-- for pretending to live among you in peace-- these traitors shall die!"