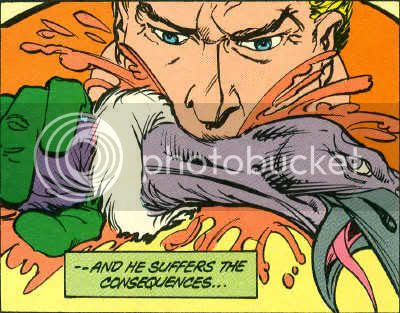 Batman: In Midway City, the Dark Knight Detective delivered the stone tablet and number sequence he'd received to museum curators Carter and Shiera Hall for further study. Later in his Batcave, the Caped Crusader determined that the number sequence could mean the end of the world, and set about contacting Midway City. Thus led to a team-up with Hawkwoman in the Peruvian jungle, as the followed a trail blazed by Hawkman, which led that Winged Wonder to Rann. Batman and Hawkwoman were attacked by a green monster that ripped off the heroine's wings. As the pair were about to plunge off a cliff to their doom, Adam Strange arrived. He couldn't save the duo and catch a Zeta-Beam home, could he?

Aquaman: In the Sahara Desert, the Sea King snatched a vulture that intended to feast on him from the air, and turned the intent against it. Rejuvenated by the 97% water found in the bird's blood, the Sea King rose to carry on with his trek. Less than an hour later, another seeming oasis proved real, and Aquaman emerged from it to find the classic Justice League of America had homed in on his signal device. As an aside, among them was the Green Lantern John Stewart that was clearly a recolored Hal Jordan.

Aquaman explained, "I was on duty in the JLA Satellite [even though it had been destroyed once or twice by that point in continuity]-- when I detected unusual transmission beams originating from the moon, and teleported myself down to the beams' target point-- an excavation site here in the Sahara. From hiding, I overheard the Arab diggers say they were looking for 'cuneiforms of Allah's sacred words' which would give them 'the power to defeat all' ...When I snuck into one of the tents to steal a burnoose disguise, I discovered a device of apparent alien technology... and I also saw that the diggers were not really Arabs." Aquaman explained he'd had to run into the desert after being detected, only to find he'd just given the full skinny to disguised aliens mimicking the JLofA. Resuming their true forms, the bald, pointy-eared aliens directed their ray pistols at the Sea King...

"Viking Vengeance" was by Doug Moench, Carmine Infantino and Bob Smith.
Posted by Diabolu Frank at 12:00 AM