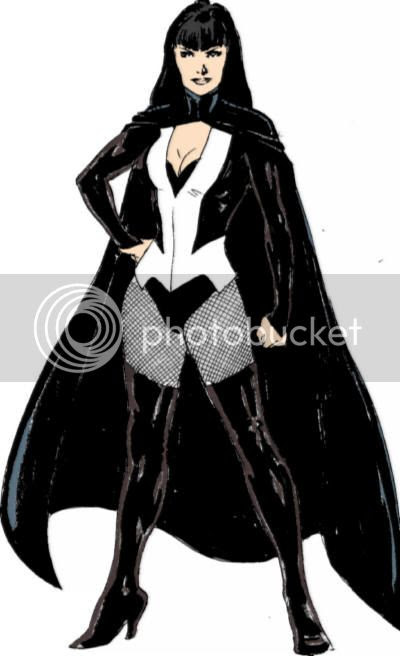 We're nearly two years into the New 52, and design-wise, there's been some clear hits and misses. One of the earliest, easiest litmus tests is the cosplay measure. It takes an awful lot of money and effort to pull together winning cosplay gear, so if the print design isn't inspiring, it'll be given a pass by fans of dress-up. For instance, despite stamping a glowing red welcome sign across Supergirl's perineum, the ladies of cosplay seem to have embraced her latest threads. I'm sure Supergirl's having a whole wardrobe of redesigns in her history helps with that acceptance, and the nifty current cape clasp couldn't hurt.

Despite having spent a decade and a half in alternative costumes, Zatanna's fans have never seemed to accept anything that strayed too far from her classic top hat, tails & fishnets look. Flashpoint and Justice League Dark tried to sell them on a goth/Suicide Girls ensemble, but when you type "New 52 Zatanna" into a Google image search, 99% of the results are scans from recent DC Comics. Folks don't seem to want fan art of it, and nobody compliments the cosplayer who puts her entire ensemble together at the local Hot Topic outlet.

DC seems intent on correcting this by preparing Zatanna for "The Trinity War" by giving her a hybrid of her first costume and its nearest (though still far distant) competition, the Scarlet Witch knock-off George Pérez worked up in the 1980s. A few days ago, Geoff Johns tweeted what appears to be an Ivan Reis design, which brings even more elements of Pérez into the mix than the number Zee wore in her short-lived solo series. The vest strongly mimics Pérez's white breast and trunks, though George avoided the exposed chest embraced here (and in most versions of the past twenty years.) The thigh high boots had already returned in the late nineties/early aughts, but the ban on the bug hairpiece, granny broach, and enormous "Z" earrings remain in place. Though the image is in black and white, we've seen confirmation elsewhere that there is no blue to be found in the suit, which is all black, white and gray. While preferable to the last two designs, I'm not sure why anyone feels the need to embrace more of a mediocre design abandoned during the first Bush administration when folks seemed to like Stephane Roux suit. Like the Maid of Might, the Mistress of Magic doesn't stay in one costume for too long anyway, and this should do well enough for now. Let's see how the cosplay turns out, eh?
Posted by Diabolu Frank at 4:56 PM

I guess it's okay as an alternate, but I still love the fishnet and tails...there's just something so classic about that. Plus it works well in real life, like it did on that episode of Smallville where Zatanna showed up.

I didn't even know Supergirl had a new outfit so I had to look it up. I like the cape and that's about it. I miss the skirt!

Zatanna is an excellent path to cosplay. The classic look is relatively classy, while still being cute/sexy, but not to a problematic degree. Exempting the horrid Flashpoint thing, of course.