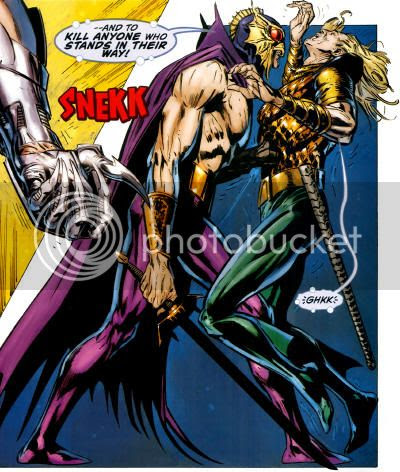 After Atlantis fell, things went to crap, and fish people enslaved Caucasians with gills. They were used to mine minerals in toxic environments for some unnamed evil surface people. The Dweller in the Depths showed up to do his best Iron Eyes Cody impersonation, but Arthur Joseph Curry displayed hateration over that whole abandonment thing. The Dweller apologized, but Artie Joe still wanted to kick his ass, and the completely unnecessary ruckus alerted a sentry. King Shark caught the Aurati fish trooper for some fine damage control, and the Sea Devils threatened to beat information out of the poor chump. Whoops, vicious cycles, as the Aurati Raiders had themselves been coerced by bad guys in armored sea-mechs. The Sea Devils wanted to liberate everybody, but Aquaman was a pissy little jerk who still thought the Aurati needed punishing. Dane Dorrance explained to Arthur Joesph that he was being less than pragmatic, and let's be honest, getting schooled by one of the Forgotten Heroes means folks can hear your gills suck at 50,000 leagues.

A mer-gator chick King Shark popped a woody for named Daki patrolled the area, and the captured raider explained she was the beloved pet of the master. The Dweller used magic to help free Mera and her men, while Arthur Joseph started arguing with Mera's main warrior Atsiul again, and we're on page fourteen. Could something remotely interesting please happen? Okay, Mera finally cornered the Dweller and moved those tentacles out of his face, presumably recognizing her husband.

The group finally made their way to the master, who was the Ocean Master, "revealed" on a splash page after it had already been spoiled on the damned cover. Since this is the Savage Sword of Aquaman Jr., Orm brandished a blade and ran around without a shirt, which doesn't fix the ongoing liability that is his dorky mask. Also, the two main adversaries swim to the nearest rock so they can stand there and swordfight as though they were on dry land, because you could fit the imagination brought to bare by these creators in a thimble. Orm talked crap about the corporations that I guess he was still in league with, and how he loved the lawlessness of the ocean, and then he stabbed Aquaman at a weird angle with a knifed glove instead of skewering him. Sounds like the makings of a superficial wound and a tepid cliffhanger to me.

"Masters" was by Kurt Buisek and Butch Guice. Before I forget, seeing as this is the penultimate issue of these creators' run I'll cover before my subscription blessedly ran out, Jackson Guice draws the oldest late adolescent ever. Arthur Joseph Curry must have that early frost disease, because he looks like he's a fiftysomething chain smoker in more panels than not. Cut your hair and spit out your chaw, creep. People liked this?