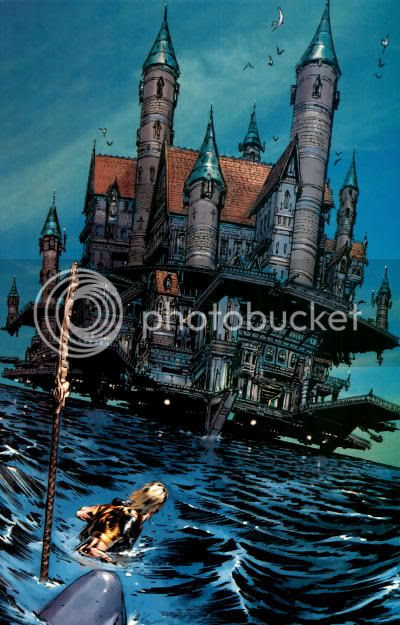 Mera tried the hard press to get Arthur Joseph Curry to stay with her as another capable warrior, even if he only powered his way through combat, but nothing doing. Mera still passed the kid some coin, and King Shark took him to a dive bar (ba-dum-bump-pish.) There, A.J. was seduced by a mermaid named Tejaia, who tried to roll him and kill him after the interspecial sexin' with the help of her friends. Fins were kicked, bars were totaled by super-strength, yadda yadda.

On the way to Maine, A.J.'s conscience got the better of him when he tried to ignore a beacon calling out for Aquaman. It turned out to be from this giant twisted mansion on the open sea called Windward Home. The Sea Devils hung out there, as did Mark Merlin's widow, Elsa Magnusson. A former weapons contractor turned philanthropist named Jimmy Lockhart financed the operation, a "cross-specialization think tank" of "scientists, philosophers, mystics" answerable to no one in international waters. The reason why they were trying to reach Aquaman was because they were hosting the ghost of Vulko, his former adviser.

"Deep Down" was by Kurt Buisek and Butch Guice. The art got really rough in places, and the script is clearly still fine-tuning the intended story engine, which was surely supposed to spin a lot of plots out of Windward Home. That might have been okay, but Busiek ditched the book in under a year, so not too much came of the joint.