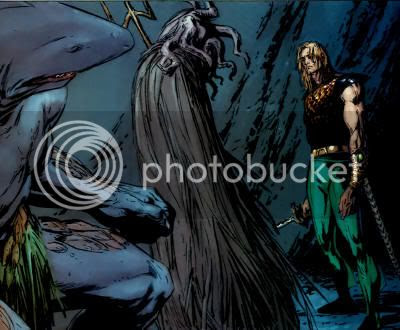 There was a storm. A research lab fell partially into the sea. A young blond man awoke disoriented in the ocean. A voice inside his head called him to help the wounded Nanaue, King Shark and son of the god of sharks. Nanaue had been speared through the sternum a year earlier during the Infinite Crisis, and the blow had never healed right. That's why he struggled against a band of Aurati raiders, so that even the comparatively slow and awkward help of the boy named Curry was enough to turn the tide. The kid's game was weak, with lines like "You want a... piece of me, guys? Take your best shot!" He was your basic Peter Parker analog, but in swim trunks.

Arthur Curry led Nanaue to the Dweller of the Depths, a semi-amphibian humanoid with strange powers. The Dweller gave Arthur an amulet that would allow him to communicate with the creatures of the sea, and had him don an armor that resembled Aquaman's old costume. The Dweller had healing hands, but they could not help with Nanaue's old war wound. Nanaue didn't appreciate Arthur reminding him of the guy that skewered him, but he got over it. The Dweller though the boy was Aquaman, also named Orin. The kid corrected that Arthur Joseph Curry was his only name, and he was no super-hero.

The son of oceanobiologist Dr. Philip Curry, Arthur Joseph was born three months prematurely at a research lab in Avalon Cay roughly twenty-three years earlier. Philip used his knowledge of marine adaptability and amphibian evolution to save the child of his dead wife, but the boy would have to live the rest of his life breathing through gills underwater. The boy grew up in a tank at the Curry-Jonas Oceanographic Center at Avalon Cay with very few outside trips. "Most of what I've seen, I guess, I've seen on television." The Dweller of the Depths explained the prophesy he knew, which more closely resembled that of the Silver Age Aquaman born of Atlantean and lighthouse keeper, who married an otherworldly queen to help him rule his kingdom. The Dweller predicted the death of a child, and other doings that were in fact from Aquaman's past, not Arthur Joseph's future. Curry rightly thought the Dweller nuts, but what he didn't know was the Dweller actually was a transformed and slightly addled Orin. Still, Arthur and Nanaue let the guy feed them a meal.

"Once and Future" was by Kurt Buisek and Butch Guice. I was in the minority that was really enjoying John Arcudi's run on Aquaman, and my liking Busiek's work is an exception to the rule. Busiek had helped restart the Conan franchise at Dark Horse, and tried the same formula on Aquaman, to bland result. It's Luke Skywalker, Old Ben Kenobi, and a Han/Chewie hybrid, but underwater in loincloths. Arthur Joseph's dialogue is straight out of the Bronze Age, all the backstory is a snooze, and Jackson Guice is really lousy at drawing undersea action. Instead of multidimensional combat, dudes just stand on rocks against dark blue backgrounds and throw punches. Yawn. I especially like how they gave A.J. nice long hair that somehow lays flat in the ocean depths, but I guess if gravity affects fights, why not 'dos that have been passe since the early '90s? The coloring by Dan Brown is also super drab, which I guess suits the art and subject matter, but still feels like an entire movie shot through the same blue filter.