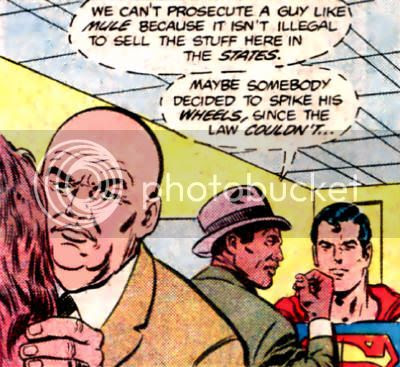 HISTORY
Legally in the United States, Mordecai Mule was an exotic furrier who owned legitimate Metropolis businesses like Shandar Furs. Illegally abroad, Mule poached endangered animals protected by the governments in their native lands, specifically India. This unconscionable trade brought Mule to the attention of the vigilante known as the Vixen, who began systematically destroying Mule's shipments to America. The Vixen's crusade in turn drew Superman into the plot.

Near financial ruin, Mordecai Mule traveled to New Delhi to personally oversea a major shipment. Mule became aware that the television reporter Lana Lang was investigating his affairs, and decided to eliminate her. Mule started an elephant stampede to crush Lang and her associates, but Superman saved the group in time. Mule himself was confronted by the Vixen, whom he tried to skewer with a blade hidden in the tip of his cane. The corpulent criminal lacked the speed and stamina to connect with the Vixen, causing himself to pass out from exhaustion. Mule and an accomplice were bound together by the heroine and left for local authorities.

Quote:
"The wind seems strong today. That's good. It'll carry the scent of fear when we start the stampede!"

Created by: Gerry Conway & Curt Swan
Posted by Diabolu Frank at 12:30 AM