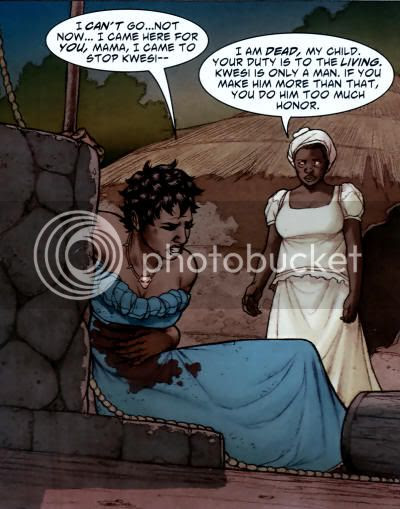 “The wounds from Aku Kwesi’s claws do not close, no matter what creature I invoke… more magic? …Clark was right. I shouldn’t have come here alone.”

Kwesi spit curses past his white streaked beard about interfering foreigners and instilling the same murderous lesson upon Mari as he had her mother. “Anger gives me one final burst of strength.” Mari kicked the gun out of Kwesi’s hand, who again lifted her off her feet by the throat. “This is not over.” In a burst of light and a puff of smoke, Kwesi vanished.

Kwesi’s insubordinate man Sia was handsome, with his nude head adorned only by the hair upon his chin. Abiesa’s husband Owo wanted nothing to do with the “black magic at work here,” but Mari’s friend yet defended her from Sia’s advances. However, the fellow was merciful, helping Mari to walk out of the village. “She is not safe here. Kwesi’s eyes are everywhere, and he will return. He must believe she has been dealt with.” Sia led Mari to the outskirts of town, and pointed her in the direction of a well six miles away. “The land will decide whether you live or die. Goodbye, She-Spirit.”

The Dagombi Plain once meant freedom to Mari, but was now largely deserted due to “famine or disease…” Mari made it to the good water of the well, but she had lost a lot of blood. Mari was haunted by visions of her mama warning of death coming for her daughter with the night. “In the city, you forgot the land that gave you your powers. You must remember now, if you want to survive. Use the land-- you need its help. You are not a costume, Mari. You are not a name or a duty to a cause. You are your bones, and your bones are of this place. Remember.”

A pack of jackals charged Mari at the well, so she turned the spirits of the hyena and cobra against them. This taught them fear, and as soon as Mari had walked a distance, the jackals devoured the ones of their own who had been felled. “On the plains, miles from refuge, nothing is wasted.” Mari eventually found a tree, and climbed it for safety to sleep throughout the night. 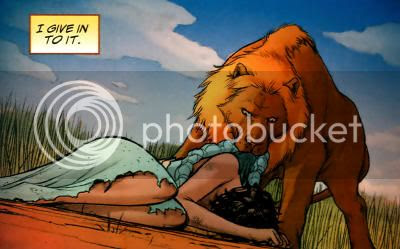 A monkey woke Mari the next day, when she discovered her wounds contained pus and were hot to the touch. Trying not to panic, Mari reached for her Justice League communicator, but then tossed it aside. Lacking Mari’s pride, the monkey ended up setting it off as she continued her trek. Arsenal was on monitor duty when the signal came in, and alerted Black Canary and Superman. Dinah figured Mari had bitten off more than she could chew, and though she consoled Clark by saying he’d done the right thing in letting Vixen go, “Now we’re going to do the smart thing.”

Vixen smiled as she remembered playing with Abiesa as a girl, and how she thought she was different enough to somehow be rich someday without ever leaving her African home. Her attention was then directed to a lone male lion, perhaps tossed out of his father’s pride, stalking prey on his own. Mari tried to hide from it in the tall grass, but failing that, called on the speed of the cheetah. Regardless, her body was too weak, and she was overtaken. Just as she had given in, the lion relented, and Mari looked up to see it had been domesticated by an elderly man. “Zaki, shame on you. You’ve frightened her half to death, and it looks like she was half-dead already. Don’t worry, child. You’re safe now.”

“Return of the Lion Part 2: Prey” was by G. Willow Wilson and Cafu with colors by Santiago Arcas. Isn’t it awfully convenient how Kwesi teleported away when he could have easily finished Mari off with his claws? Seems like a writer inexperienced with super-hero action wrote herself into a corner right at the beginning of a five part mini-series that would be erroneously listed as six on the cover for the remainder of its run. You’d think after getting it right on the first issue’s cover they’d be set, or would have at least caught the mistake by the final issue, and you’d be as mistaken as the editors were.
Posted by Diabolu Frank at 12:00 AM