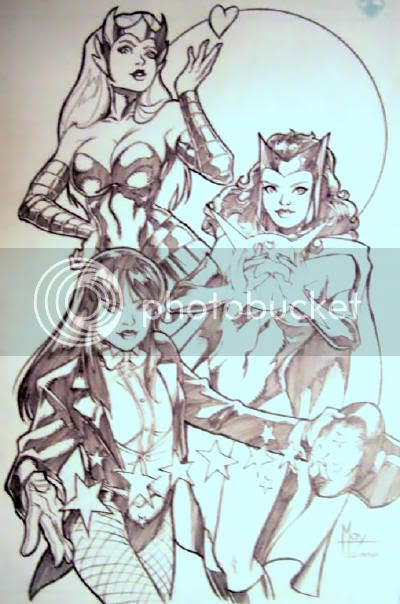 Jeffrey Moy was one of the primary artists of the Post-Zero Hour reboot of the Legion of Super-Heroes, bringing a sweet-natured, doe eyed Japanese "manga/anime" sensibility to the more innocent, Silver Age influenced venture. Conversely, today he may be best known for his downright pornographic images of comic book and outside media super-heroines. His take on Zatanna falls somewhere in between, selling her as a good girl in the occasional naughty situation. You can see some of that at the Jeffrey Moy Sketchboard, but be warned that most of the women in the adult section are placed in rather graphically compromised situations. As an example, here's a 2007 non-nude bondage image of our Zee that I'd say still falls short of worksafe.

The top piece is a 2004 Mid-Ohio Con sketch grouping Zee with Marvel mages the Scarlet Witch and the villainous Enchantresses. Now that would be quite the match-up. I'd root for Zee, but her inconsistent powers makes her the sure loser of the three.

Next is the 2003 cheesecake piece below (Click To Enlarge) 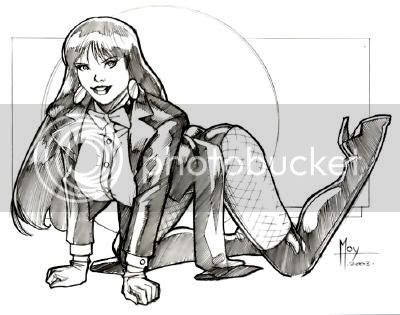 Man, how do you get such a perfect circlar background in the midst of a Mega Con 2005 sketch (Click To Enlarge) 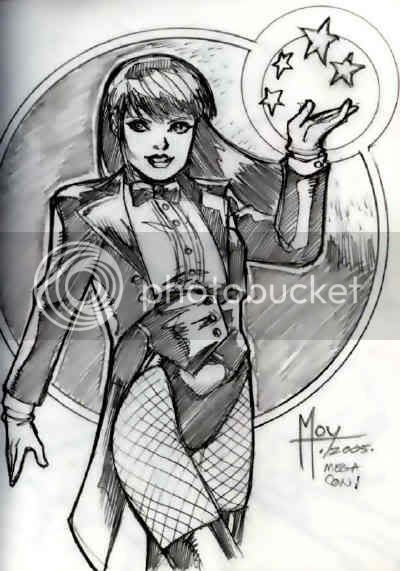 This is the oldest and most realistic of the pieces here. I dig the "pick a card" background. The "top hat & tails" look hadn't really begun its comeback yet, so this seems to draw from the few late '80s appearances of that style. 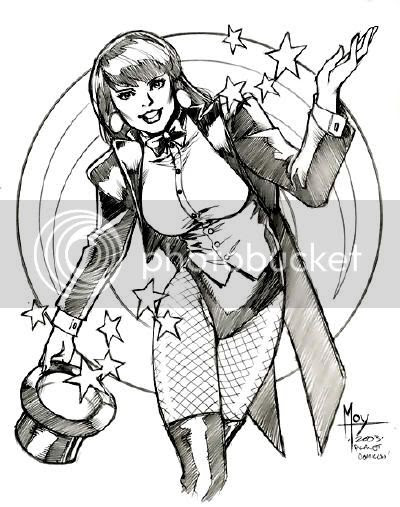 I saved my favorite for last. Zee's cheekbones are a little too chiseled for her usual girl-next-door vibe, but I love that vaguely Bronze Age face, which could have been inked by Joe Rubinstein.
Posted by Diabolu Frank at 11:23 AM