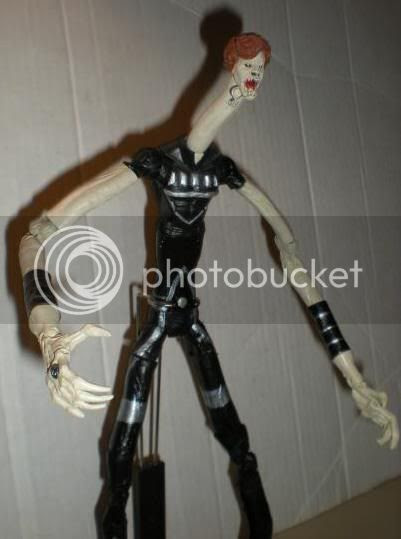 Here's another certified bad ass Google find-- a custom from the Figure Realm board. Here's the creator's comments:

I've never been big into the DC Universe beyond the usual classics; Batman, Superman, The Flash, etc. The only DC I read regularly was old Batman issues and Green Arrow. But now with the onset of "Blackest Night", I've taken a real interest in the world around Green Lantern. And so, my first DC comics custom.....

Ralph Dibny, aka Elongated Man, now one of the first of the Black Lanterns preying upon the hearts of the living throughout the DC Universe. Started with the simple choice of a movie Mr. Fantastic, specifically the one that had interchangeable parts to make him 12" tall. Swapped the boots out for ones in my fodder drawer. I replaced Mr. Fantastic's head with a retooled head of Banshee....used a blowdryer to heat his head up and clamped it tight to let cool off. This created his stretched face look. Then some sculpt to the hair and nose....hot glue to create drool (apparently he has a real drooling problem being "dead", don't believe me see Blackest Night #1). His wristbands were made from clear vinyl; I had originally sculpted them but the weight of the sculpt just kept pulling him down so changed pace. All of his flesh was painted with Rotten Flesh, and then drybrushed over with light flesh. Sculpted the insignia on his chest and painted the whole uniform with black, white, and silver. Details done to face and created a bloody mace (why? again, read Blackest Night #1) from Beta Ray's hammer, sculpt, and random blood bits I found in the fodder drawer.

Used a stand from one of the Playarts Final Fantasy figures. It has a nice interchangeable height and grabs the figure around the waist instead of a peg in the back. Needless to say this figure being so tall and made out of rubbery plastic makes him lean drastically so he really needs the extra support to stand.

And now he can menace over all my other works as being the tallest custom I've done, so far....

StEvOtoys actually has three pictures on display here, and you must check them all out! From the translucent drool to the gore on Hawkman's misappropriated mace, you can't miss this! Also, his Black Lantern J'Onn J'Onzz, complete with tentacle arm, can be seen at the Idol-Head of Diabolu blog.
Posted by Diabolu Frank at 10:02 PM

That is off the hook crazy. Stretchy guys are fun when they're alive, but somehow stretchy + dead = insane creepiness. A very nice custom, though!

By my reckoning, there isn't enough variety in stretchy guys. This goes to show how effective they can be when used differently.

Brilliant and true! That's a really cool custom. Of all the stretchable superheroes, I've never really seen an action figure that did them justice. But this is really, really good.