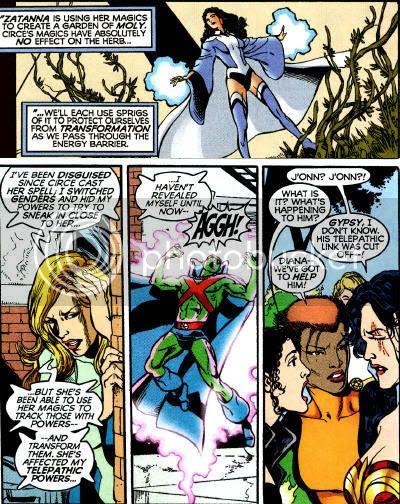 Following the Our Worlds At War crossover, Wonder Woman's mother Hippolyta was dead, and her former Paradise Island of Themyscira was in ruins. The Earth had taken on great damage and large numbers of casualties, as well as begrudgingly accepting extraterrestrial refugees. At this vulnerable moment, the evil sorceress Circe chose to resume hostilities toward Wonder Woman and super-heroes in general. Circe mystically sealed off New York City, then transformed all male super-heroes in town to various types of wildlife. Circe had amassed a small army of villainesses (including the Cadre's Nightfall) to hunt these valiant animals to death, then invited Wonder Woman to try and stop them.

While she waited, Circe set other wheels turning. She sent her new male Cheetah to lay a trap in Metropolis, which snared Superman. She also took Air Force One, where she began torturing the bestial former members of the Injustice Gang she had once taken part in. President Lex Luthor became a giant were-spider and the Joker part goat.

Oracle electronically gathered an all-female super-squadron on Liberty Island to plan the retaking of NYC. Vixen, Gypsy and Zatanna had major roles to play...

Zatanna: Wonder Woman explained to the gathering of heroines, "Zatanna is using her magics to create a garden of moly. Circe's magics have absolutely no effect on the herb... We'll each use sprigs of it to protect ourselves from transformation as we pass through the energy barrier. Once inside, we'll use the rest of it on Circe's beastiamorphs to cancel the spell cast on them. But first we'll need to liberate the city and defend them against the villains hunting them."

Vixen: Among the first to reply to Oracle's call was Vixen. "The other Ultramarines are missing, but I'll be there." Vixen's female teammate 4-D would also appear in the upcoming battle, but in a later issue. Wonder Woman immediately continued her instructions from above, "Doctor Light-- Power Girl-- Troia-- Black Canary-- and Wonder Girl and Vixen will be field leaders. Teams will break down based on familiarity and power. Please listen to your team leaders. They have the experience we need to help save our friends." Vixen surmounted the barrier surrounding New York, then stood by Gypsy as Wonder Woman gained and lost telepathic contact with J'Onn J'Onzz.

Gypsy: Among the Liberty Island party, shown standing between Star-Spangled Kid and Inferno. Entered NYC, only to hear troubling word about a dear friend...

Martian Manhunter: Telepathically called "Diana!" just as Wonder Woman led her army through the energy barrier. "Thank the moons of Mars you've come--! I've been disguised since Circe cast her spell; I switched genders and hid my powers to try to sneak close to her... but she's been able to use her magics to track those with powers-- and transform them. She's affected my telepathic powers... I haven't revealed myself until now-- AGGH!" Eldritch energy surrounded his pained form as Wonder Woman called out, "J'Onn? J'Onn?!"

Gypsy: Clearly upset as she demanded "What is it? What's happening to him?" The telepathic link had been cut off.

Gypsy & Vixen: Swept up in a sonic attack from the Silver Swan before rejoining the counter-offensive.

Batman: Turned into a were-rattlesnake.

The Creators: Phil Jimenez managed to write and meticulously draw this issue as part of a monthly schedule, but the quality is uneven, and a guest penciller would soon follow. In a book positively drowning in details, both related to recent continuity and in illustrating several hundred super people, it's funny that Circe has so little motivation for her grand scheme. Then again, the whole storyline fairly reeks of fan service over logic, but getting a reunion of every living Detroit Leaguer but Elongated Man suited me very fine.
Posted by Diabolu Frank at 12:00 AM