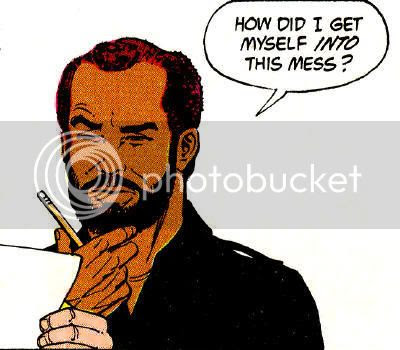 Francis Chuck Patton is an African-American former comic book artist best known for a stint on Justice League of America. More specifically, he is closely associated with the period in which the team relocated to Detroit, MI and became staffed with new, multicultural super-heroes. With Gerry Conway, Patton created Gypsy and Vibe, as well as redesigning Vixen and Steel: The Indestructible Man.

Patton got his start at DC Comics in the April, 1983 cover-dated The Flash #320, beginning a brief run of Creeper back-up stories. This was followed by art for Green Lantern, The Brave and the Bold, and Green Arrow before landing his permanent assignment on JLofA. However, Patton left his creations within their first year, taking on sporadic jobs on The Vigilante, Who's Who, The Omega Men, Teen Titans, Legion of Super-Heroes, Blue Beetle, Secret Origins, the Outsiders, Action Comics Weekly and DC Challenge. Patton also tried his fortunes at other companies with DNAgents, Daredevil, X-Men and The Official Handbook Of The Marvel Universe. He was considered to replace Todd McFarlane on The Incredible Hulk, but turned the offer down when he was asking to emulate the outgoing artist's style.

As with his JLD partner Gerry Conway, Patton became disillusioned with comics and moved into children's television animation. His credits include Dinosaucers, G.I. Joe, Captain N & the Adventures of Super Mario Bros. 3, Inspector Gadget Saves Christmas, and Teen Titans. More recently, he has turned to directing, on such projects as Dead Space: Downfall and Spawn, for which he won an Emmy award for Outstanding Animated Program.

Chuck Patton's legacy in comics seems to consist mostly of Justice League Detroit and well-regarded serial pairing Nightwing and Speedy. The image above is a self-portait of Patton, circa 1985, and heavily embellished by inker Mike DeCarlo. One imagines that had Patton inked himself, he might have more closely resembled another of his creations, Dale Gunn. Like Marv Wolfman's proxy Terry Long, who married a super-heroine, I suspect we now have the answer to why Gun had both Vixen and Zatanna vying for his attentions... Chuck Patton was the artist on JLA when I started collecting comics in the mid 80's. He's one of my favorite artists of all time and left a big void when he left the Detroit League. Thanks for your tribute to him!

You're welcome, Pete! I love Chuck Patton as well, and I think his work could have been as iconic and marketable as Jose Luis Garcia-Lopez's if things had worked out differently. I'm glad he's done well outside the field, though.

"Like Marv Wolfman's proxy Terry Long, who married a super-heroine, I suspect we now have the answer to why Gun had both Vixen and Zatanna vying for his attentions..."

That explains a lot! I always wondered why Zatanna and Vixen were throwing themselves at this middle-aged bald guy. Now I get it!

Hi Frank,
I was surfing the web today and stumbled onto your site---all I can say is...WOW!
LOL---thank you so much for the very kind words and appreciation for a period of my life that to this day was the best of times and the worse as well.
Its nice to know that my work then wasn't as reviled as I thought it was, and that somehow, despite everything from lousy script to inept beginner's art, the Detroit JLA has its admirers.
Thanks for the memories.
Sincerely,
Chuck Patton

Chuck, as I said before, your "inept beginner's art" was to my mind gorgeous, and one of the great pleasures of the series. Without your dynamic, time-tested redesign of Vixen, I doubt the character would be remembered today. You're one of Rob Kelly's favorite Aquaman/JLofA artists, and I'm sure he'll eventually hit you up for an interview at his popular Aquaman Shrine. I've talked with a great many others who agree with both of us on that point. I obviously dig the JLD (even Vibe... sorta,) and the team has built a kitsch cache amongst fandom for about a decade now. In a perfect world, we would have seen your art on Slurpee cups and beach towels alongside Garcia-Lopez. I'm just glad to hear living well is your revenge on comic's negligence, and appreciate your comment! :)

Frank, to be compared to Garcia-Lopez, who has always been an idol of mine, is quite an honor and a compliment, man!

Garcia-Lopez was always up there along with Big John Buscema, Gil Kane, Neal Adams and Dick Giordano as my artistic mentors--now ya gone and made my head swell!
And for the record---Ive always HATED Vibe and wished I had spoke up then and refused to design that idiot! LOL
But I was young and.....well that's a story for another time.....
Looking forward to talking to Rob, and again, thanks for the appreciation.

I think one of the highest compliments I can pay is that you look like none of your artist's artists. You produced clean, attractive, iconic images of heroes in the same way Garcia-Lopez did, but in your own fashion. Everyone looked "right," perfectly on-model, and seemingly effortlessly. I bet you were envied for that more than you know. But of course, you were then forced to draw the least marketable League collective ever, in a grim 'n' gritty setting to boot. I love most of those characters (with Vibe, Steel and Elongated Man being the exceptions,) but your talents demanded the big guns, darn it!

By the way, I also posted your bio on one of my catch-all side blogs, where a friend and former customer of mine mentioned how he'd been trying to track you down for commission work. I expect you've moved on, but if by chance you still do that sort of thing, he'd love to hire you for one of his storied mash-ups...

Chuck - Please don't doubt your JLA artwork. I've been a reader of comics for 26 years now. It was your Justice League Detroit stories that finally got me to pick up the JLA on a regular basis.

Your rendition of Zatanna and Elongated Man are still the definitive versions in my mind.

It's nice to hear you are doing well. Thanks for the great comics!