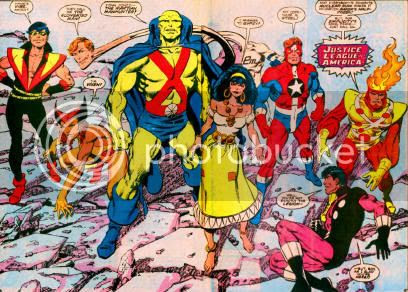 Darkseid looked down upon the Earth, and saw that it was good. This displeased him, as it should simply be under his thumb. His minion DeSaad showed him images of Earth's most inspiring super-heroes: Martian Manhunter, the Flash, Captain Marvel, Batman, Green Lantern, and Superman. To crush the hearts of mankind, Darkseid sought to destroy their legends.

Brimstone: A flaming giant under the control of Doctor Bedlam that began to terrorize New York.

Firestorm: The Nuclear Man and former member of the Justice League of America called from Pittsburgh to face Brimstone. Took a beating, and realized that he was out of league, so he went to fetch one.

Task Force X: Reformed under Amanda Waller, nicknamed the Wall based on her size and stubbornness. Enlisted Colonel Rick Flag to gather a team of super-villains for her Suicide Squad.

Cosmic Boy: A founding member of the 30th Century's Legion of Super-Heroes, on vacation in his past. The second champion to face Brimstone alone, and though he held up longer than Firestorm, was still the worse for wear.

"Name's Vibe, Amigo!"
"They call me the Elongated Man!"
"I'm Vixen!"
"J'Onn J'Onzz-- the Martian Manhunter!"
"I answer to Gypsy!"
"My code-name is Steel!"
"And everyone's favorite Nuclear Man makes it an uneven baker's dozen! But, for simplicity's sake, Pinkie-- just call us... Justice League of America"

The Creators: What's so simple about "Justice League of America?" That's kind of a mouthful, in fact. And how do you say it with a logo in your word balloon, like Firestorm did? Does this mean he's an honorary member of one of the most disreputable super-teams ever? Worse, did he claim it without consent?

Anyhow, here's "Crisis 2," since the other planned sequel never materialized("Crisis of Souls," I think it was to be called. I couldn't find reference to it on the 'net.) Where "Crisis" was relentlessly grim, Len Wein's scripts for "Legends" gave it an old school feel that everything would turn out okay in the end. This was in direct opposition to John Ostrander's plot, which was arguably darker than "Crisis," seeing as how personal and permanent the punishments were here. The art by John Byrne and Karl Kesel contributed to the lightening of the book, as even the villains seem too clean and neat to mean anyone real harm. In other words, Legends has aged very poorly, but is still hard to hate, especially when offering a two page spread of the kids from Detroit.
Posted by Diabolu Frank at 10:00 PM