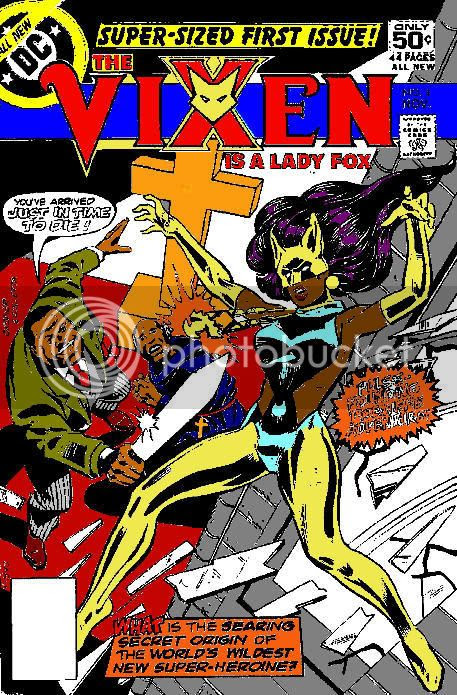 "THE VIXEN No.1, November-December. "Who Is The Vixen" is by Gerry Conway, Bob Oksner, and Vince Colleta. Fashion model Mari McCabe comes in contact with the Tantu Totem, and suddenly regains her long forgotten past, as well as the powers and abilities of three animals. At the United Nations, she attacks the African ruler who murdered her father, years ago."

That was the synopsis given by The Comic Reader #159 (August 1978) as part of their announcement of DC titles caught in the infamous "Implosion." You can read in great detail the circumstances in this article at Dial "B" For Blog. The gist is the suits at Warner Brothers and sales impacted by heavy snows conspired to cut DC comic production by 40% in one fell swoop, robbing what should have been the first African-American super-heroine with her own title. I'm quite fond of Mari McCabe, and am pleased that she's begun to get her due a quarter-century later through the Justice League of America comic and cartoon.

Dial "B" For Blog covered the first issue of her non-series, among many others here. That's also where I got the art poorly and hastily colored under duress by myself above. According to that blog, "Created by Gerry Conway with Carla Conway... The story's final caption reads: "THE END…AND THE BEGINNING." Vixen finally made her official debut three years later, in Action Comics #521." You can also find the splash page for the aborted project there.

Unsatisfied with those slim details (wrapped in an otherwise highly informative article,) I cast about on the internet for more. Luckily, I came upon the Answer Man Bob Rozakis' synopsis of the issue, as part of fantastically extensive coverage of Cancelled Comics Cavalcade, the only place Vixen's story ever saw print. Here's what he had to say...

"The last full-length book included in is THE VIXEN #1. Is she the same character who finally debuted in ACTION COMICS #521, three years after the DC Implosion? The same one who became a member (with Vibe and Gypsy) of what's been referred to as the Justice League of Detroit? Well, yes…and no.

Super-model Marilyn McCabe is on top of the fashion world and a modern businesswoman, but after seeing President Manitoba of the African nation of D'Mulla on TV, she faints. This brings back awful memories of her childhood, memories buried in her subconscious oft her father being murdered by Manitoba.

After consulting with her attorney and realizing she can not pursue Manitoba from a legal standpoint, Marilyn discovers that a necklace left with her by her father has mystical powers. It awakens powers within Marlyn and she dons the costume of The Vixen.

The Vixen learns that Manitoba, while now preaching peace, intends to unite all of Africa under his rule…by force. His true mission in coming to the United States is not to preach peace, but to murder the sole remaining witness to his crimes in his own country. Luckily, The Vixen is there to save the day. In the battle that ensues, Manitoba is killed by his own manic attack, bringing down a massive cross which crushes him.

The story ends with Marilyn feeling that a new energy has taken control of her, that she has been reborn. And the bottom caption promises us that this is "The End…and The Beginning." (Well, so, it took three years before she actually appeared. Maybe she was just a slow starter…)

Beginning with issue #2, there was to be a back-up feature in THE VIXEN, one that I was going to be writing. It never got past script stage… and a few columns from now, I'll be sharing all the details about a series SO canceled that it never even made it into CCC!"

So there you go. Hopefully The Vixen #1 will be available for us all, but until then, I'm happy to have enough details to keep me quiet in the meantime.
Posted by Diabolu Frank at 11:59 PM

Vixen would have probably been like Black Lightning or Steel, or some of the other DC Explosion titles had the Implosion not happen. I could see it running for about three years before DC pulled the plug on it. Not a great run but still pretty decent for a cold launch!

And that Dial B For Blog post is the ultimate resource for the period. That's what got me turned onto Beowulf.

I'm not as confident as you regarding Vixen's longevity. Women were a tough sale in the 70's, and a street-level black one to boot? I wish she'd been given the chance, though. Still, perhaps it's better she was relatively new when she joined JLDetroit. Had she been more established, or an established dud, we may have never heard from her again.

Well, I should mention that one caveat for my prediction is that she'd never move past bi-monthly, and probably have a backup feature (maybe Rose and Thorn?). In that sense I could the title lasting 15 or 16 issues, putting it solidly into it's third year. You're second point is dead on, though. If her title had come and gone without much fanfare, she'd probably not be riding her current League status. Although, that worked for Black Lightning, who turned a failed solo career into a solid team gig for years, so you who can say?

Yeah, but B.L. was a dude, and one of DC's only black dudes, and an Outsider. Vixen quite probably would have been a curious obscurity, like the Thorn or Black Orchid. Without the Detroit years, I suspect she would have been crossover meat, or victimized in some b-lister's book for shock value.