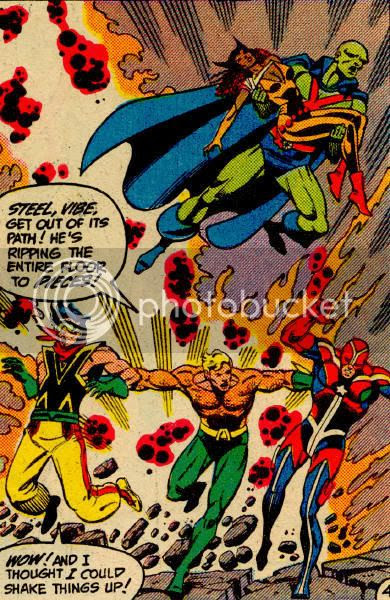 Aquaman: Teleported involuntarily with team to mountain headquarters of the Overmaster, who claimed he's what killed the dinosaurs. Overmaster and his evil super-team the Cadre attacked Aquaman's rudderless collective. Caught and returned a super-charged crowbar. Whined to self about his miserable failure as a monarch and group leader. Proven right when even Ralph ignored his orders. Wrestled freakin' Crowbar, only after the guy had lost his only weapon. Tried to redeem self with Captain America-brand speechifying. Vied for embarrassing quote spot with "Neptune's Trident!"

Vibe: Pulled a stupid face when saved from an Overmaster energy blast by Aquaman. Nailed by Crowbar. Saved by Steel from being blown away by Shrike, who also had to explain to Vibe how to use his power.

Martian Manhunter: Rescued Vixen from energy blast. Analyzed and explained Black Mass' powers. Ordered team to retreat into a crevasse. Bragged, "A Martian's eyes are sensitive to the shadows..." Deduced Overmaster was a phony "god" relying on stolen alien machinery. Along with Aquaman, detected the "telepathic presence" of the gigantic sleeping alien victim of this theft. Only member to follow a command of Aquaman, "J'Onn, we're both telepaths... but you have more experience communicating with alien minds. You know what to do. The others and I will buy you time. As you say, my friend, good fortune." Took on the big boss himself. "Have you in your godlike travels ever seen a Martian shigar? Allow me to broaden your education!" Felled Overmaster with Gypsy's help.

Gypsy: Alerted Dale Gunn of the team's peril, who flew the both of them in a L.O.S.T., which traced the League's location. Blasted Overmaster in his/its Achilles tendon with laser. At the command of Martian Manhunter, reached the hovering pyramid that awakened the sleeping alien, who caused the Cadre to vanish and left Earth in its massive spaceship. Threw her hat in the embarrassment ring by admitting to self "Vibe is sexy..."

Creators: Conway & Patton w/Rick Magyar. Part of the rational behind a less powerful and experienced League was to avoid making established heroes look foolish or weak in combating a common monthly foe. Seems that rather than fixing a storytelling trap, the writer just introduced foolish and weak characters so that they could be written the same or worse without protest. Steel and Martian Manhunter are portrayed as the only seemingly competent members here (though Vixen performed well while injured.) Zatanna especially has had nothing to do since the new team formed, despite being arguable its most powerful member.

J’Onn J’Onzz’s Nicknames of the Issue: "JJ" -Steel, repeatedly.
"Martian" -Overmaster
Often referred to as "J'onn J'onzz," in full, this issue. Only Aquaman uses just his first name, and just as often in conjunction with the surname.

Most Embarrassing Vibe Quote of the Issue: "Taste the air, amigos."
Posted by Diabolu Frank at 10:02 PM