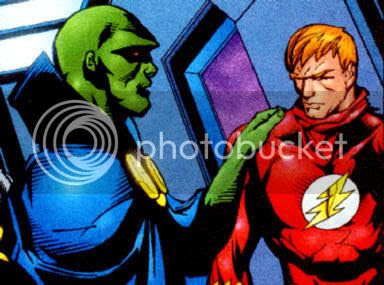 Martian Manhunter was part of an assemblage of heroes who forcibly teleported the Flash onto the JLA Watchtower for questioning. After the murder of Flash’s unborn children by the new (no-longer-Professor) Zoom, the Hal Jordan incarnation of the Spectre wiped the memory of the the Flash’s secret identity from the face of the earth, including within the very mind of Wally West himself. Batman deduced and informed West of his own alter ego, and demanded West explain the situation to his teammates. Among them were Firestorm, who wondered aloud why the Manhunter didn't simply read the Flash’s mind to gather information.

“Superman wants to give him the opportunity to open up freely to us, Ronnie. The Flash has his reasons for what has happened, and as a longtime friend, I am sure they are inculpable.” West recognized, “I can feel the Martian Manhunter lingering on the outer edge of my mind. The back of my scalp is numb, but I keep my distance. J’Onn lost his family a long time ago. I think he can ‘see’ the same kind of sorrow and pain in my eyes—because I hear three words float into my head. ‘I am sorry.’” More concerned about finding his estranged wife than clearing matters up, Flash had to be convinced by Superman to again unveil his visage to his teammates. J’Onn tried to console Wally, verbally this time. Also present at this "mindwipe intervention" were Aquaman, Wonder Woman, Green Lantern John Stewart, Green Arrow, Zatanna, Hawkman, Elongated Man, Black Canary and the Atom. This specific assemblage would foreshadow dark revelations to come. Geoff Johns, Howard Porter and Livesay tell the tale.
Posted by Diabolu Frank at 11:36 AM