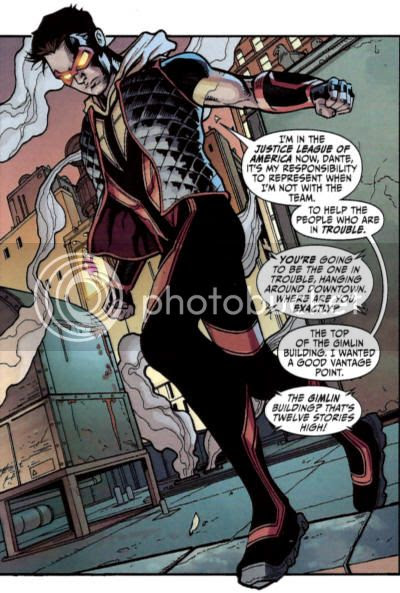 Vibe stood on the top of the Gimlin Building, twelve stories up, scanning the area for signs of trouble while talking to his brother on the phone. "You can't fly, genius! If you see any 'trouble' from up there, how are you supposed to get down in time to stop it?" Also, Dante was sick of lying to their father about Cisco's whereabouts while he was out on patrol. Not sick of lying about his own whereabouts, mind, just Cisco's.

At A.R.G.U.S., Director Amanda Waller asked, "Tell me, Agent Gunn--is this kid going to bend every order we give him? Or just the ones that are matters of interdimensional security?" Dale assured her that Cisco and Dante hadn't breached their confidentiality beyond confiding in one another. Waller still believed Vibe to be "one of the most powerful super-humans on the planet," so he needed to get up to speed with her needs fast, which included manipulating the Speed Force. 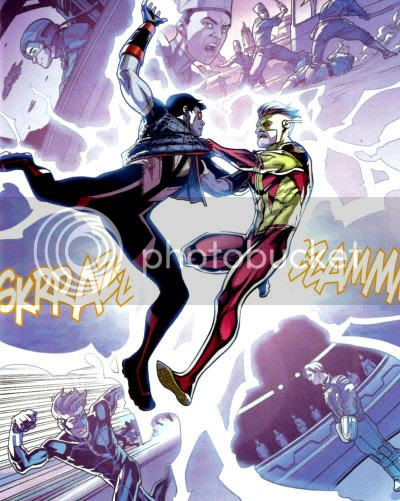 Vibe was on his way home when an A.R.G.U.S. airship showed up to carry him to New York in pursuit of the "thief and arsonist" known as Kid Flash ("though his relationship to the Flash is tenuous.") Dale Gunn had to reign in Cisco's enthusiasm at visiting the Big Apple as an A.R.G.U.S. squadron was guided by Vibe into the subway system. Cisco randomly decided to engage Gunn in small talk, learning he'd been recruited out of grad school by the C.I.A., served fifteen years, then transferred to A.R.G.U.S. as soon as it was up and running. Gunn also "had a daughter. Once."

In the tunnels, Kid Flash began disarming the A.R.G.U.S. troopers. Only Vibe was able to see him, and was able to defend himself against super-speed with his vibrational powers. Vibe managed to dampen Kid Flash's speed, and pursued him alone on foot, pretending that there was interference in his communication device to ignore orders to wait for back-up. Kid Flash reengaged Vibe, causing feedback that allowed Vibe to see parts of the Kid's history, and triggering explosive energy surges all the way back to A.R.G.U.S. equipment in Detroit. Both heroes were thrown for a loop, and Vibe was nearly struck by an oncoming train. 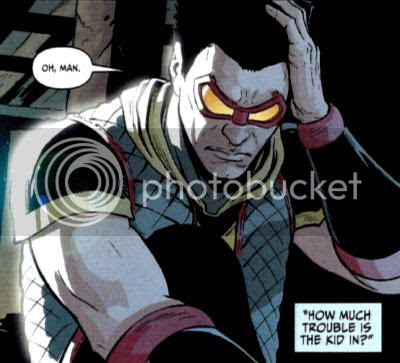 Kid Flash declared his innocence, his lack of the personal memories Vibe had uncovered, and his unwillingness to submit to further investigation by an A.R.G.U.S. stooge. Vibe had second thoughts about that back-up, but his communication equipment was really working poorly at that point. Kid Flash had been in the tunnels to visit his point of arrival after traveling from a future he couldn't remember, and though Vibe wanted to help him, Waller aborted the mission for fear that a negative feedback loop created by further interaction could unravel time itself. Kid Flash angrily refused Vibe anyway, then fled. Waller told Agent Gunn to chew Vibe out for his insubordination, but she was actually very happy with the mass of data collected during the encounter.

Unbeknownst to Waller, there was a major complication from the instances of feedback created by Vibe and Kid Flash. The power dampening generated in the Circus had faltered, allowing Subject 24 ("Gypsy") access to her abilities. Creating the illusion that she was a guard who had been trapped in her cell, Gypsy lured another guard into freeing her and escaping. 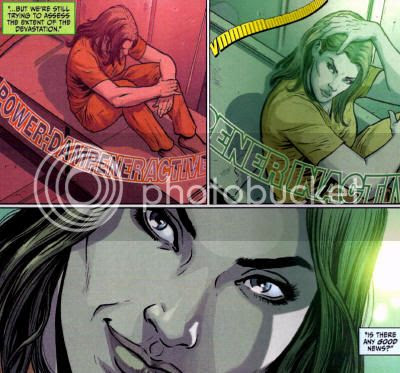 Back at the Ramon Family home, Cisco told Dante that for a supposed "violent criminal," Kid Flash passed up plentiful opportunities to kill him and his group. Cisco was finally asking questions about A.R.G.U.S., and Dante pointed out that this "super secret government agency" had already imperiled his brother repeatedly without his knowing much of anything about them. Francisco Ramon began working out a strategy to investigate A.R.G.U.S. when a figure in purple and gold armor teleported into his room to reinforce his suspicions. "...Time for you to start asking the right questions. And if you don't... you'll die just like all the others."

"Trial by (Flash) Fire" was by Sterling Gates, Pete Woods & Sean Parsons, and Fabiano Neves. Gates doesn't quite keep up the humor of the previous writers, but he does immediately move Vibe past being a well-intentioned patsy into a more thoughtful and challenging protagonist. I've never been fond of Woods' work, so I perked up on the pages Neves drew on his own, adding a dynamism and heroic sheen previously lacking.