2012 Super-Team Family: The Lost Issues: Zatanna and The Scarlet Witch 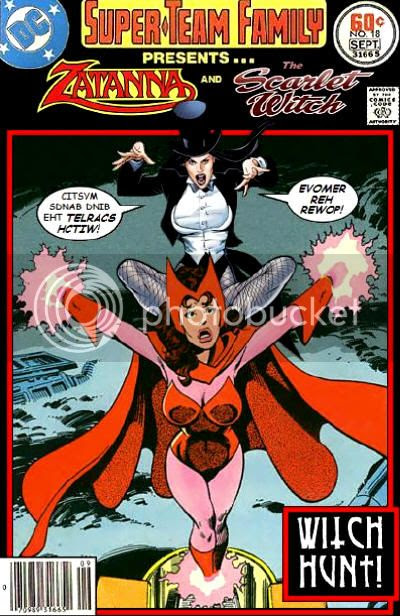 I sincerely hope that Marvel's The Avengers serves as a wake-up call for Warner Brothers to pull their DC properties together and get it done finally. Since 20th Century Fox released Batman in 1966, and Warner offered Superman in 1979, it's just been chocolate or vanilla over and over again (with very sporadic limited edition weirdness like Supergirl and Steel, which are just Superman additives anyway.) I don't want the WB to crap out some rushed turd of a Justice League movie, but we're seriously in the midst of a super-hero arms race here. Hawkeye is a relatively minor character in the Marvel movies, and Green Arrow is a TV guy anyway, but if you try to put two meta-archers on the silver screen DC will not come out looking good. That Flash movie just doesn't seem to be coming, and now Marvel Studios and FOX will each debut alternate versions of Quicksilver well ahead of the Scarlet Speedster.

Now we come to Zatanna and Scarlet Witch, created within months of each other, although the Zatara concept was far older (more so if you trace it back to Mandrake the Magician.) Zee isn't exactly a name brand, though she's put in some time on guest turns in TV through both animation and live action. With Sony, WB, FOX and Marvel all building competing super-hero universes, Zee had a niche in the cute girl next door sorceress department. Unfortunately, Wanda Maximoff will be in Avengers 2 in 2015, so Zee gets tagged a "rip-off." I vastly prefer Zee, as Wanda has always been a "mewling quim" or a sagging medicine bag dripping with cray-cray, as opposed to being cool and generally adorable while still kicking all sorts of arcane ass. Kind of a drag, but hey, leaves room on the movie roster for Vixen, right?

Say, in case you missed it last year, check out Marvel Two-in-One: The Lost Issues: The Thing and Zatanna, or maybe...