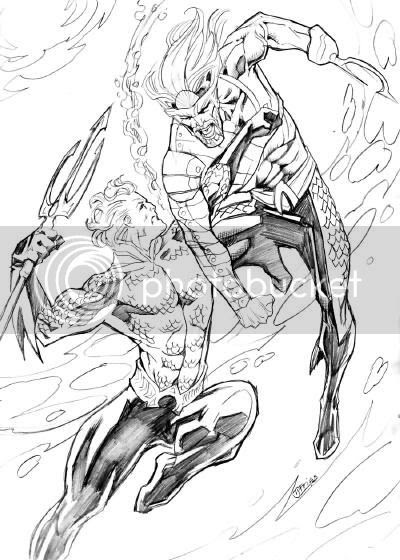 "Continuing my series of sketches themed "Classic Versus DCNU", I present Classic (yet modern) hook-handed, hairier Aquaman versus DCnU, yet oddly more familiar orange and green clad Aquaman. I might have to give the edge to the guy with the hook for a hand, having lost his hand and all. So he's really upset."

I liked Aquaman well enough as a kid, but didn't become a fan until my then-favorite writer, Peter David, was announced to take over the character's adventures. I bought a lot of back issues in preparation, and came to love Atlantian lore. In fact, Time and Tide was comparatively disappointing, and I found the harpoon-hand to be very stupid. I didn't make it a year into David's run, which only seemed to get worse, especially on the art front. The more David tried to make the guy kewl and edgy, the lamer and more desperate he seemed.

Geoff Johns had already rebooted back to the iconic Sea King for Brightest Day, so he didn't really benefit from the New 52, and I feel he lost a lot from his past history. On the other hand, despite emphasizing the lack of respect Aquaman receives, it also means unloading a lot of terrible baggage that no one will miss. I think it's fair to say that even David supporters probably won't shed any tears over misplacing Koryak along the way, and once you factor in Erik Larsen and the Sword of Atlantis, we all win. Aquaman, though he suffers from a writer wanting fans to like him sooo hard, is still a lot more keen and formidable today than that dirty hippy looking dude from the '90s.

This ought to be in color.