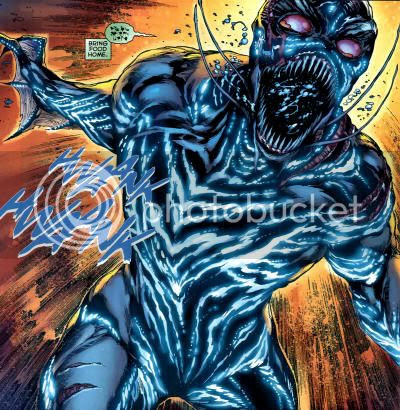 Flashback: Tom Curry stood out on the dock of the bay, crying and telling his departed wife Atlanna what a good kid they had. Little Arthur ran up to see if his dad had spotted the whale he supposedly was on the lookout for every day at sunrise, "in case she came back."

Presently: The largest of the present Trench creatures tossed Aquaman around. When the Sea King tried to "VUU VUU VUU" it, the creature was briefly pained, then bit the hero's shoulder. Mera was introducing the smaller ones to the hell of getting cut to pieces by agua-fu. Aquaman continued his struggle against the boss creature until it got fed up, unleashed its bio-luminescence, and called the Trench beings to carry their food back home. A cop noted that they sounded like seals.

As dawn broke, Aquaman continued to be hassled by the cops while totally in the right, including pointing out that the fuzz should hold their fire around cocoons. The Trench had taken some of their prey alive, paralyzed inside the gooey shells.

Aquaman took one of the creature's bodies against military orders and leaped away. He explained to Mera that they would take it to Stephen Shin, the mysterious friend of his father's seen earlier in the photo album. He was a marine biologist who Tom had taken Arthur to as a boy to help develop his powers, "And then he tried to kill me... Because I wouldn't take him to Atlantis." 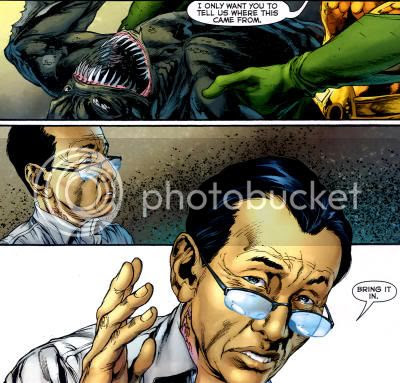 Shin was surprised to see Arthur again outside his house, but agreed to examine the Trench creature's body. It was somewhat like a piranha, and its energy needs would require the consumption of 20-30 times its body weight daily to simply function. A fluid they spit out caused paralysis in normal humans. The cocoons were made from a paste secreted from under its tongue. The sulfide minerals crusted in its gills indicated that its habitat was near hydrothermal vents of the kind found in the Mid-Atlantic Ridge. "Out of the trench... Do you have any idea what this will do for me? With this I can get my credibility back." Or not, since Aquaman refused to leave the creature with Shin, despite his pleas and attempted barring of the exit with his frail body. The heroes were then off to investigate the trench...

"The Trench Part Three" was by Geoff Johns, Ivan Reis and Joe Prado. This was my favorite issue so far, since I felt it had the best balance of back story, exposition, action, characterization and tantalizing morsels of future developments. A lot can come of a simple throwaway line like Shin's noting, "You still kept that trident. Despite all the trouble it might bring." Something is going on with his neck, as well. Anyway, the book remains gorgeous to behold, and while still a slight read, this time it was a satisfying one.