Bizarro Comics: Aquaman in "Silence of the Fishes" (2001) 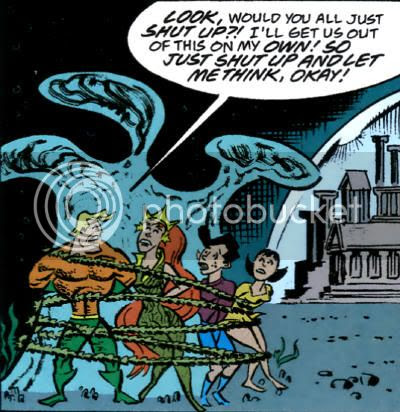 In this two page gag strip by Evan Dorkin, Brian David-Marshall and artist Bill Wray, the entire Aquaman family had been tied up by Black Manta. Mera thought the Sea King should call on the Denizens of the Deep for help, but Arthur refused, as they were not on speaking terms. Aquaman wouldn't budge on the issue, so Aqualad and Tula tried to call on their finny friends to no avail. Arguments ensued, and lets just say you don't want to jack around with Black Manta's stakes. The strip is cute, with some good digs, but it definitely falls under the "Aquaman sucks" humor heading.