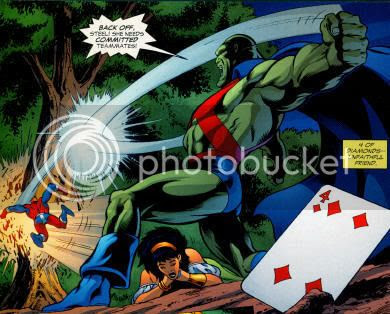 Martian Manhunter:”This team has a long way to go before it achieves the coherence it needs. [The elder Leaguers] and I can provide guidance--but only if you hear us. To that end, I’ve brought you four here [Biskotasi Peak in Ontario,] to train together on unfamiliar tasks, far from the Detroit streets you usually inhabit. It’s my intent to improve your trust in each other, and in yourselves.” Well, not just that, “...as my telepathy allows me to listen secretly—to your innermost thoughts... It’s up to me to make sure you all get better.” Also, to fix burgers, though Vixen asserted that using a portable, flameless electric stove is neither camping nor cooking. Anyway, thank retroactive continuity for explaining the lack of Martian mental powers for most of Conway’s run and those ugly JLA signal rings.

Steel: Had a nightmare his now mustachioed grandfather and Dale Gunn held him down fully conscious before ripping into him for the operations that turned him into a cyborg. He awakened from his revere en route to a hike into the Canadian woods, presumably after the mission against Amazo. The peace and quiet made Steel inconsolable, as his body was in constant pain from its modifications. He smiled and put up a false front for his teammates, though for readers, the angst was endless. Like his grandfather, he secretly acknowledged to himself “Second-stringers, third-stringers, and rookies. The Justice League has gone to hell.” Also, he thought of J’Onn J’Onzz, “He learned English pretending to be a cop... but he was pretending. Who knows what a Martian feels inside?” Henshaw was raised to be a hero like his grandpa, so he ran maneuvers with his team, despite his loathing of their status and his own. Later in the evening, members of the Royal Flush Gang tracked the team down and used mood-altering playing cards to cause the Martian Manhunter to attack Hank. Though Henshaw never landed a single blow in his brief row with the Manhunter, he was clever enough to deduce the cause of the attack and rush the Gang with an uprooted tree trunk. In the melee, he accidentally crushed Queenie and Ten of Clubs with rolling boulders. Hank was only too happy to gloat to himself over his decisive move, showing no remorse other than being part of a League characterized as losers by, of all people, the Royal Flush Gang.

Dale Gunn: Only up for a dream sequence this time out.

Vixen: Hopped around tirelessly for most of the issue. Came on to Vibe due to a mood-altering card, only to be backhanded by a close-fisted Paco.

Gypsy: Joined Vixen and Vibe against Steel in maneuvers, but the only panty shot was hers. Nearly asphyxiated by a playing card.

Vibe: You already read it, except the part where he got decked by Queenie before her untimely smooshing.

Zatanna, Elongated Man & Sue Dibney: Absent. They knew what was good for them.

Aquaman: The main continuity sticking point, as Vibe and Steel are in their second uniforms, both donned after Arthur quit the team. So let’s just pretend that after Aquaman and Mera returned with the League to Michigan, the couple decided to stick around a bit longer to see if they could settle in there. Arthur remained team leader after J’Onn’s disastrous first outing, but suggested the return trip to Canada to encourage team building, including much needed management experience for J’Onn. Oh, and Steel decided to test-drive his new suit, but it got all sweaty with grass stains here, so it was at the dry cleaners throughout Crisis on Infinite Earths. Did I mention a random walleye happened to overhear the Royal Flush Gang plotting to ambush the League, found the Scion of the Seven Seas swimming laps in Lake Erie, and warned him? Also, did I mention Jack Miller didn’t write that?

The Creators: ...It was actually Steve Englehart, clearly having a ball with the type of oddball super-heroes that made him famous. Tom Derenick supplied the gratuitous panty shot, though it’s really always been Gypsy’s fault for wearing a skirt to a knife fight. Derenick recalled Ron Lim and Chuck Patton in equal measure. Jerry Ordway's inks overwhelm a cover pencilled by Mike Zeck of the full camping party.

J’Onn J’Onzz’s Nicknames of the Issue: Still using the full name at times, but Steel, Gypsy and Vixen all drop just "J'Onn" most of the time.

Most Embarrassing Vibe Quote of the Issue: “C’mon, Jay-El-Lay! Le’s get ‘em!”
Posted by Diabolu Frank at 2:00 PM