To be honest, I'm more of a JLA fan in theory than practice. I was familiar with "Super Friends" and other sideways exposures, but I didn't start picking up the title regularly until the International period. I then skipped out, returned for "Breakdowns," and left again with Giffen & DeMatteis. I came back for Gerard Jones' largely execrable run, but again steered mostly clear until Morrison finally fulfilled the promise of the classic team. I did eventually go back to the early and quite painful Gardner Fox and Denny O'Neil runs, plus a smattering of Satellite issues before diving into the Detroit train wreck.

My point in telling you all this is that unless Showcase reveals the 70's to be a golden decade, the Justice League of America has trended toward the lousy for nearly its entire existence. In my experience, the "classic" membership sucks all the life out of the stories, leaving it up to the aberrant and inappropriate to produce anything worthwhile to read. The three issues I'm spotlighting here are no exception, as they deal mostly with a criminal cartel run by were-corporate executives given to grisly gladiator combat, and the League's stepping into their arena is as curious and exciting as it is plain wrong. Allow me to detail why: 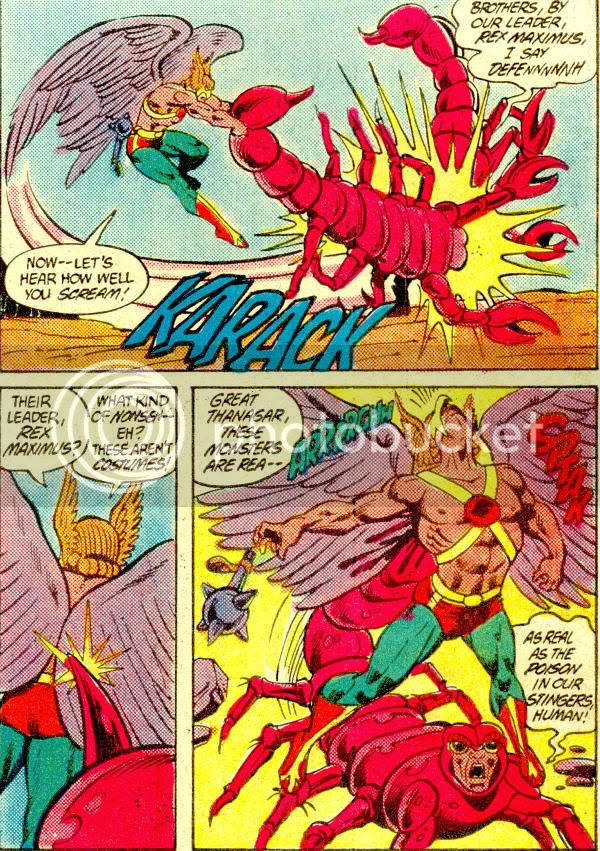 The story opens with filthy, amorally rich spectators sent into orgiastic fits when splattered by blood ejaculated into their faces from the killing floor of a metropolitan coliseum. This was followed by Superman and Wonder Woman being battered unconscious by an anthropomorphic killer whale. A man-rhino then gores the Flash and leaves him for dead. Hawkman us at an archaeological dig where scientists are skewered and crushed by giant hybrid scorpions, one of whom's stingers penetrates the winged warrior's backside and leaves him deathly limp and the bloodletting continues. Elongated Man is savaged by attack birds and a steam press run by an old... Chinese... wait, that wasn't were-creature related. Ralph Dibney just sucked, and got his ass kicked by a geriatric Yellow Peril leftover. Oh, and writer Gerry Conway's pet character Firestorm avoids getting powned by taking a renegade cat woman into his care. As I hope I've illustrated, this story is gory as hell and uncompromisingly brutal in a manner that grabs your attention span by the collar and slaps it across the face.

Things slowed down considerably in the second chapter, as the catwoman revealed she was part of the board of an insolvent company that chose to mutate itself and turn to technology theft to buoy their fortunes. I know it seems ridiculous, and it is, but imagine the pleasure of seeing the League combat a Ken Lay jackal-man and you'll forgive the excess. Besides, there's an extended arena clash between evil leader lion Rex and a traitor that ends in barehanded disembowelment and decapitation, which is always distracting. Hawkman being gassed in his sickbed along with Hawkwoman while Wonder Woman is beaten into submission and taken hostage also works. I only wish it were the Amazing Amazon that got gored, as the subtext would add a sexual component to this great mound of wrongness.

By the final chapter, so many life fluids were flowing that they had to start coloring it purple to get past the Comics Code Authority, or else it was expelled in such haste as to have not yet taken on oxygen. The surviving Leaguers invaded the were-Republicans secret island base, where Superman was pelted with red sun radiation and crucified. Aquaman fared better, using his telepathy to lobotomize the whale man, never to be heard from again. The sea king also choked a snakeman, making him the big winner in backsliding to barbarism amongst our heroes. Zatanna even managed to be useful, though the were-men were devolving throughout the arc, and ended up regressed back to seemingly lifeless animal form. Somebody call PETA?

The full arc was pencilled by Chuck Patton, who by rights could have been the Jose Luis Garcia-Lopez of the 80's if he'd just stayed the course. He even managed to overcome the inking of Romeo Tanghal, a feat George Perez struggled with. I don't know that anyone has ever drawn so iconic and dynamic a Justice League, which only furthered the contrast with the savagery of their foes. It was wonderful, and of course all to brief, and the rest of Patton's career would be defined by his guilt in co-creating Vibe, the breakdancing wonder. If only we could get the inter company crossovers up and running again, so that Patton and Steve Ditko could craft the perfect coda to their respective careers-- a team-up with Speedball.

In summary, do go find these three back issues and relish them. It was all pop locking and BWAHAHA for the next couple decades. If anyone can recommend a similar diversion from Satellite Era shittiness, do leave a comment. Stories like this I could make room for.
Posted by Diabolu Frank at 1:50 AM