Dispatches From The Arrowcave (Hi Adama!)

"Finally, Adama (Dispatches from the Arrow Cave) has been struck down with Con-Plague. He's not feeling well and is resting up. He unfortunately won't be able to participate in the crossover. He'll be with us in spirit!"

It may be far worse than that, as your favorite Green Arrow blog has also been struck by... CRISIS ON BLOG-ONE! Masterminded by The Irredeemable Shag of Once Upon a Geek, you're witness to a DC Universe Blog Event so overwhelming, even Adama's absence can't keep the Emerald Archer from being enlisted! In his stead, this is Frank Lee Delano reporting!

Our post today revolves around the extraordinary cover to the 1998 Crisis On Infinite Earths Hardcover. Laid out by superstar George Pérez, the enormous piece was painted over by the universally acclaimed Alex Ross! Below are three key Arrow-related appearances on the masterwork. 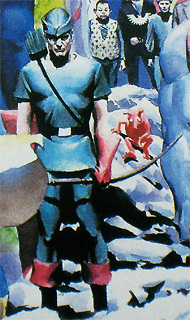 This is a very sullen-looking Golden Age Oliver Queen, probably because he was retroactively wiped from existence after the Crisis. For over a quarter century, the "Earth-2" adventures of GA and Speedy never happened. They were never in the Seven Soldiers of Victory, and the closest they had to a counterpart during the Golden Age was Alias... the Spider. Even with the recent return of the Multiverse, you'd be hard pressed to find any noteworthy recent appearances of the GAGA (O.G.A.?)

Alternately, Ollie could just be depressed about the lousy company he's been given in this shot, including Chop-Chop of the Blackhawks and Space Ranger's sidekick Cryll. You couldn't find a worse freak show if you included the Doom Patrol, for whom Doug has recently started a blog, which is taking part in this crossover! You might also try Rick's Mail it to Team-up, another participant! 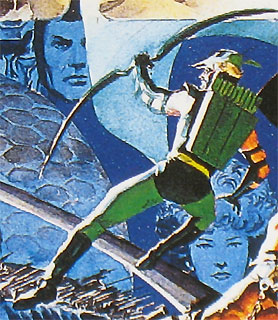 Here's the classic Silver Age Green Arrow we all know and love! That "platform" he's stepping on is actually the Elongated Man, member of Justice League Detroit, whose blog features an extension of this image (along with teammates Zatanna, Vixen, Steel and Vibe.) Actually, Ollie's former Justice League of America allies are well represented in Crisis On Earth-Blog. Founding member Flash races through Kelson's Speed Force to his seeming end in this Crisis entry (though we now know otherwise!) Rob Kelly's The Aquaman Shrine and my own Martian Manhunter blog The Idol-Head of Diabolu spotlight others who preceded Green Arrow on the team. Who can forget the ideological rivalry between bleeding heart liberal Ollie and the right wing Hawkman, showcased at Luke's Being Carter Hall? Among the Johnny-Come-Latelies who barely served with Ollie are Firestorm Fan Shag's favorite Nuclear Man and Rick's beloved Plastic Man. Wait-- there's no Black Canary blog? What a gyp! 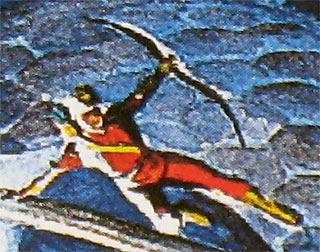 Finally, here's Speedy, and boy was he a Tiny Titan in the original piece. Sorry for the resolution folks! I already covered the Doom Patrol elsewhere, which nixes the only real connection left for Roy Harper here. Hopefully he won't mind if I plug the final Crisis on Earth-Blog all-star, Rob Kelly's I am the Phantom Stranger, especially seeing as he designed our great logo (with the Neal Adams GA!)
Posted by Diabolu Frank at 5:04 PM No comments: